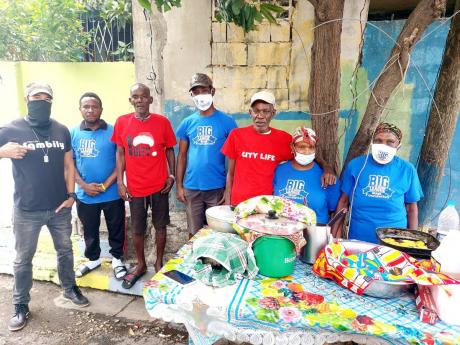 Having spent the last few months labouring in Santa's workshop, members of the Big League Foundation from Allman Town in Kingston and Southside's City Life Ministries are now tuning their sleighs as they prepare to share love and bring cheer to 2,000 children on Christmas Eve.

Through its 1City Christmas Feed the Homeless and Toy Giveaway Charity initiative, the organisers plan to reach 2,000 homeless and indigent persons in downtown Kingston, Cross Roads, Half-Way Tree and New Kingston. The toys will be distributed to children in inner-city communities of central Kingston.

Dr Carrington Morgan, of City Life Ministries, said the initiative aims to uplift the spirits of children in central Kingston, whose freedom to roam and play about in their communities have been hampered significantly by the COVID-19 pandemic and gang war.

"The inter-community violence, coupled with ongoing COVID restrictions, have dealt a double dose of despair and hopelessness for our community kids. Our goal is to, in some way, tilt the scales in bringing back the spirit of hope and happiness. The progressive steps out of these dark days may take more than a few toys, but their memories of Christmas 2021 must be good and their optimism for 2022 should be enabled," said Morgan during an interview with THE STAR.

Morgan, who is also a pastor, said that the project is more than just providing meals for the homeless and toys for the children, as it offers the opportunity to show the children love, which is the real essence of the season.

"The thing that attracted me to the initiative is not the fact that they were gathered in the community, but they were looking outwards also. What is embedded in their system is to give and to help, which is bigger than themselves. It then becomes easier as an 'empowerer' to walk with them, to guide them, to know their struggles, to be better able to connect with them and to show them that they are loved," he said.

Founder of Big League Foundation, Xavier Gillette, told THE STAR that his tough experiences as a child contributed significantly to his desire to help others.

"l, myself, dealt with hunger growing up and it wasn't easy I remember quite well my grandmother could only find dinner or any sort of food three, or sometimes four days only of the week. There are a lot of mornings l did have to get up and bring myself to school without anything to eat the night before, or in the morning when heading off to school. So yes, the initiative really started from those repeated exposure to intense hunger," Gillette told THE STAR in a telephone interview.

In June 2020, Gillette, who now lives and work in America as an aircraft logistics supplier, approached his grandmother Claudette Reid, a local chef and a well-respected citizen in the tough central Kingston community, about his desire to make a positive impact in the lives of the homeless. Some 600 mouths were fed during the charity's first project, prompting both Gillette and Reid, along with other founding members from the community, including Damion Gibbs, Sophia Davis, Phillip Basco and Kevin Stupart, to expand the reach of their charity.

Reid, 78, and who also does secretarial work for Big League Foundation, said she is proud of her grandson for the work that he is doing in bringing a smile to the faces of the less fortunate during Christmas.

"When he first came to me and 'Bun Head' (Damion Gibbs) with the idea, I was happy and immediately willing to be a part of it. It feels good to know that he has used his humble beginning as a source of motivation and hopefully we can put smiles on a lot of faces this Christmas," she said.