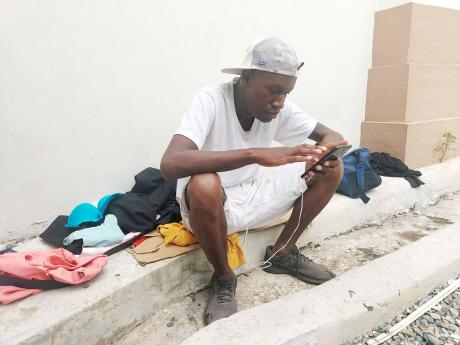 Emelio Davis relaxes on the streets of downtown Kingston.

For the second consecutive year, Emelio Davis will spend Christmas on the streets and away from his family.

But the 41-year-old homeless man, who said that he lived in the United States of America between 1989 and 2018, is hopeful that one day things will be better for him. He said that Christmas has always been his favourite season, especially as a child when his parents Keith and Hyacinth Davis, now deceased, would shower him and his siblings with an array of gifts.

"Yeah, mi remember the days when mi and mi brothers and sisters would get excited because we know say on Christmas Day, Boxing Day and New Year's Eve, wi a guh put on nice clothes and lots of food and presents will be given to us," said Davis.

He also shared that he fondly remembers the events and activities that came to characterise the Christmas season while growing up in Gregory Park, Portmore, St Catherine.

He said that he always looked forward to going to Grand Market on Christmas Eve and loved playing with his friends and watching fireworks to ring in the new year.

"We used to leave the house like eight or nine in the night and come back the next morning. Although we were tired most of the times, we loved the experience of walking through downtown because we know we will also get something nice. On Boxing Day, wi go to a treat or some party in our new clothes, then you know everyone is looking forward to New Year's Eve night because a countdown time and clappers and fireworks ago start," he said.

Davis said that he was deported to Jamaica in 2018 after serving 18 months in prison at the Gwinette County Jail in Georgia for aggravated assault. He claimed that he was forced to live on the street after deportation because he had no relatives here. Davis, who said he is a Christian, said he is hopeful that his situation will improve some day.

"The Bible asks us to have faith even if there isn't much evidence to go by. I believe that things will get better one day, all I need right now is a job. I have been seeking a job but nothing has worked out so far right now. I want to be seen as a decent citizen again. Being on the streets is not something I envisioned for my life and it is even more sad in December because of how I grew up to see Christmas," he said.