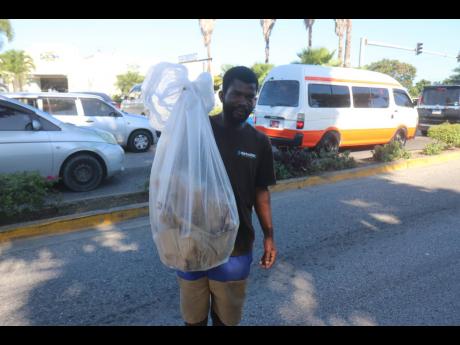 Dane Brown, who now collects trash for cash at the Fairview traffic light in Montego, St James, says it is better to earn an honest wage than to beg.

The 29-year-old Brown, who is known as the 'bucket man', recently took up the initiative to collect trash from motorists and plans to continue doing so because motorists are quicker to contribute than if he simply begs for money. Brown also sweeps the roads early in the morning.

"This ya better than begging and I want to tell the beggars on the road that. When you beg the car people, them will shame yuh. When they see me doing this, sometimes mi get food and bigger money," he told THE WEEKEND STAR. "I start working from as early as 7 a.m. People will give me the bags and things to collect the trash."

Brown stated that the Texaco gas station in the area allows him to dispose of the trash in their garbage area. Businessman Texreto Callum suggested that Brown take up this 'job'. His friendship with him began when he asked Brown to fill in for one of his helpers. But Brown would always go back to begging.

"I ask him how him reach MoBay and him tell me is a cement truck him hop on and come here from age nine. I said to him 'Yuh a big man now, it nuh look good for you to go out there and a beg'," he recalled. "[I told him] Why yuh nuh get a garbage bag and tan out deh and people will drop the garbage inna the bag and give yuh a likkle money?"

The retired policeman said Brown used to beg using a box and a barrel.

"Him never get much attention because people wouldn't give him more than $20 when begging. But now with the trash collecting, him collecting $100 and $200. Him tell me that a man give him $1,000 fi drop couple garbage inna him bag," said Callum. He said that Brown is now learning how to fix stoves but needs a toolkit. Several persons describe Brown as a hard-working, willing, trustworthy and respectful individual.

"I suggest the Government get other beggars and turn them into trash collectors at the traffic light. Give them training and a permit and this will allow them to make money," Callum said.