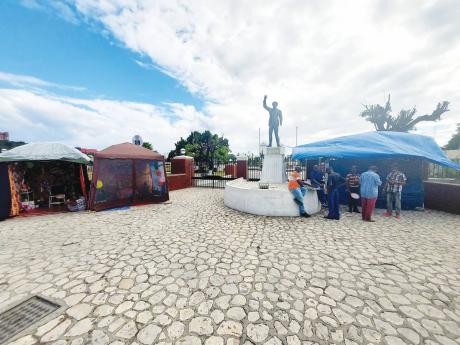 These men play a board game outside the St William Grant Park, which has been closed since March 2020. In response, photographers have set up booths to ply their trade as they are no longer allowed inside the park. 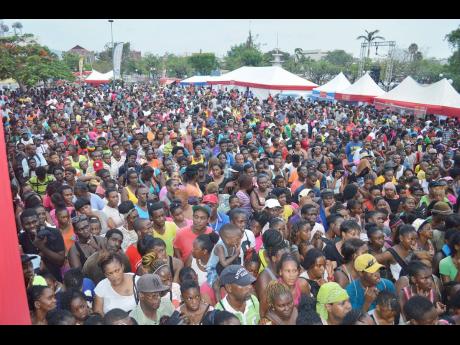 File photo shows persons packed into St William Grant Park for a back-to-school treat. The park has not been open for nearly two years.
1
2

The continued closure of the St William Grant Park in downtown Kingston has caused consternation for several persons who rely on the park for health and recreational purposes, as well as to earn a living.

The park, named in honour of renowned 1930s political activist St William Grant, has been closed since last year by the Kingston and St Andrew Municipal Corporation (KSAMC) in an attempt to control the spread of the novel coronavirus by reducing the flow of traffic through it. However, with other parks in the Corporate Area open to the public, persons say that they are upset that they are still not being allowed to use the park. Chief among them are the self-employed photographers, who were recently forced to build photo booths outside the park's gate to meet the demands of customers.

"It a mash wi up bad. Up to now wi cyah get a word from KSAMC or the Mayor [Delroy Williams] on the situation," said Anthony, who says he has been taking photos of willing pedestrians in the park for the past 16 years.

"First dem say is because of the pandemic why dem affi close it dung. But now mi a hear say no water no in the park and that is why it cannot open up back. But if yuh look on top of the restrooms yuh will see the big tanks dem," he said.

Another photographer, who declined to give his name, said that the situation has significantly impacted his livelihood.

"From 2007 mi deh a do this, a it mi use and feed mi family. Wi understand say it did affi close like inna last year when things did really uncertain wid the virus, but everywhere open up back basically so I don't see the reason the park cannot open. Mi can't count the amount of work mi lose since this a gwan," he said.

When our news team arrived, the photographers were camped outside the entrance of the park, looking on with disdain at the security guards assigned to monitor proceedings inside the park.

"Why dem ago have guard deh deh if nobody cannot enter?" another vendor questioned. A senior citizen, who says he has been going to the park for several decades to enjoy the sun or play a game of chess, said he has been feeling out of place ever since his recreational activities have been cut short.

"Mi live right round di road and fi years now, before yuh even born, mi a come here to enjoy a game of chess wid my friends. Dem don't come here no more because dem no like the idea of sitting on the outside near the street. Dem nuh like being exposed like that," he said.

Up to press time, THE STAR was unable to get a comment from Mayor Williams or Robert Hill, CEO at the KSAMC. When contacted, a representative from Hill's office instructed our news team to send an email. But there was no response.