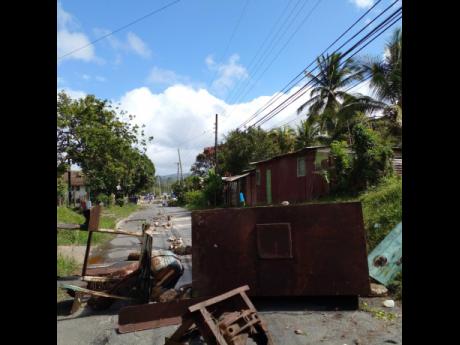 Residents used a variety of objects including rusted appliances. 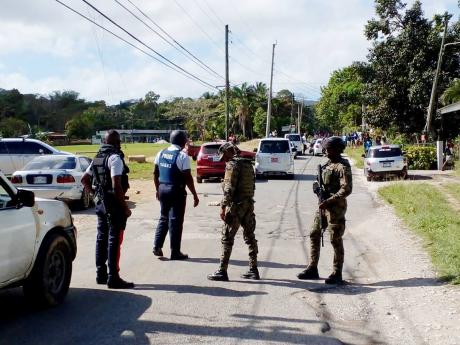 Members of the security forces at one of the roadblocks. 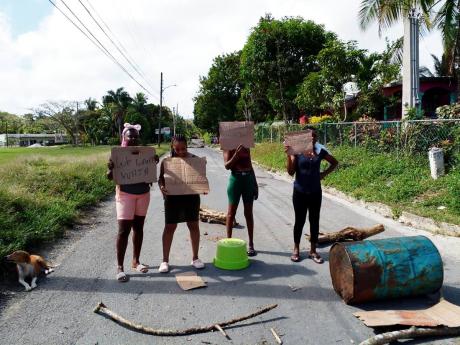 Residents of Chester Castle say that they have not had running water for six weeks.
1
2
3

Residents of Chester Castle in Hanover blocked sections of the main roadway leading to the community on Thursday in protest over the lack of running water.

The angry residents used large stones, empty steel water tanks, old motor vehicles, large tyres, pieces of trees and old appliances to mount several blockades, making it impossible for vehicles to traverse. The residents say that they have been without running water for the past six weeks. Veronica Faulkner, an elderly resident, said that she joined the protest because the situation is unsatisfactory.

"This is a populated community. We don't use pit toilets anymore. We use flush toilets so we need water to flush our toilets. We need water to wash our hands. It's COVID time and as you say water is life, so we need water," she said. Faulkner said that she has been living in Chester Castle for almost seven decades and this is the first time that she has been without water for so long. Scores of other disgruntled residents shared the same opinion and pointed out that they sacrificed going out to their various jobs on Thursday just to let their voices be heard.

Private motorists, taxi operators and commuters were left stranded, as the blockades stretched from Chester Castle to the border with Bethel Town in Westmoreland.

The scene was visited by officers from the Hanover Police Division as well as soldiers from the Jamaica Defence Force. But based on the roadblocks, the members of the security forces were faced with challenges to remove the debris from the roadway.

The residents also lashed out at Dave Brown, the member of parliament for the Eastern Hanover constituency. The residents said they will not cease mounting roadblocks and protesting until their water woes are addressed. The news team made several attempts to contact Brown, but his cellular phone rang without an answer.

Meanwhile, Andrew Canon, the National Water Commission's manager of corporate communications, said that the pump broke down and is undergoing repairs. He also said that the repairs have been hobbled by the delayed shipment of equipment.