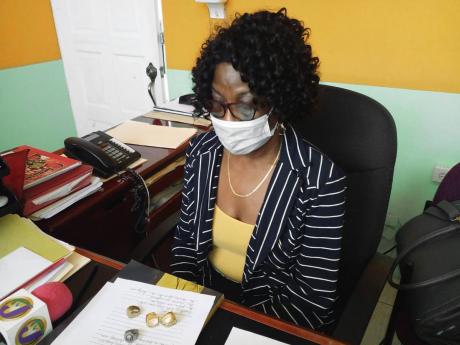 A dispute over a guard ring is believed to be at the centre of yesterday's fatal stabbing by a schoolboy by his colleague in the Trelawny-based William Knibb High School.

The shocking incident happened just minutes into the start of the lunch break. According to the school's acting principal, Audrey Steele, the deceased student, Khamal Hall, 16, accused one of his classmates of stealing a guard ring from one of his friends.

"Many of these students are wearing these rings," said Steele. "We have quite a number of them that we have confiscated over time. I don't know what value they have placed on these rings, but we are constantly taking away these rings ... and the more you confiscate them is the more they come," the acting principal stated.

It is alleged that Hall, the goalkeeper for school's daCosta Cup football team, used a piece of stick to hit the other student. The student retaliated and used a knife to stab Hall to the upper regions of his back. The injured teenager was taken to hospital where he was pronounced dead.

The alleged attacker reportedly told school officials that he concealed the knife in his shoes in order to smuggle it on to the compound. He is in police custody. His name has not been released because he is a minor.

Steele showed the news team a number of guard rings, some bearing the emblem of skulls and crosses, which she said have been confiscated from students.

It is unclear why the students were engaged in a dispute over the ring yesterday.

Meanwhile, one senior police officer in Trelawny told THE STAR that the wearing of guard rings has been linked to lottery scamming. The police have, in the past, said that some scammers in western Jamaica have been turning to the world of the occult, obeah and black magic for protection.

"Our investigations have revealed that a number of these students are active in the lottery scamming, and these guard rings are purchased through scamming," the senior cop stated.

He reasoned that the constant suspension of face-to-face classes over the past two years, due to the COVID-19 pandemic, amplified the problem of youngsters participating in the illicit trade.

"A number of them are caught up in this illegal practice of making quick money, which they use to purchase these rings, which are very expensive," the cop said.