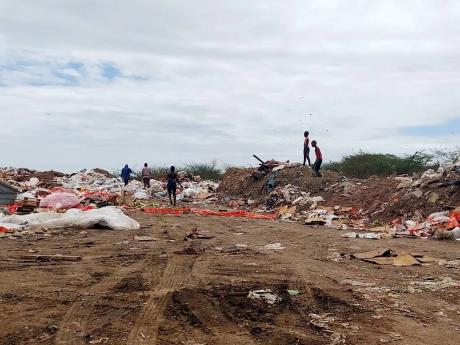 A group of pickers at a section of the Riverton City dump in Kingston yesterday.

The old adage that one man's trash is another man's gold holds true in Riverton City, St Andrew. While many persons have been fixated on the visit of the royal couple, Prince William and Kate, the focus on 'pickers' in this impoverished area of the city has been on extracting whatever valuables they can find in the 200-acre dump.

"A more than 20 years mi deh yah suh, and a it mi use and send mi four children dem to school. Two a dem a go university, one deh out yah wid me, and the other one deh foreign inna di US army," said 71-year-old Jane*.

The elderly woman told THE STAR that as early as 5 a.m. each day, scores of persons leave their bed and head to the dump, hoping to salvage useful items for resale. Naturally, most pickers at the Riverton dump appear dirty. But for Jane, it matters not how they appear once they can earn a decent change at the end of the business day.

"Wi deh out here everyday a do wi thing, so wi nuh have time fi watch what anyone wah fi say or think, enuh. At the end of the day, when wi pick out all the 'waste' from the dumb, wi know say wi a guh have buyers, and a sometimes a di same people dem weh skin up dem face pon wi come and a buy," she said.

In the region of 300 to 350 trucks turn up at the dump with garbage daily. They carry waste from all of Kingston, St Andrew, St Catherine and Clarendon.

Another picker, who only identified himself as 'Blacks', said that most of the appliances in his two-bedroom apartment came from the dump.

"Mi fan, di motor inna mi fridge, di chandelier weh mi have and even mi windows dem, mi get all a dem deh from the dump. People nuh understand say recycling is very important, and most a di thing dem weh people dash weh can be used back," he said.

"Yuh can find yuh way out here," said the 35-year-old man who has been digging Riverton's gold since he was a teen.