NWC employees back to work 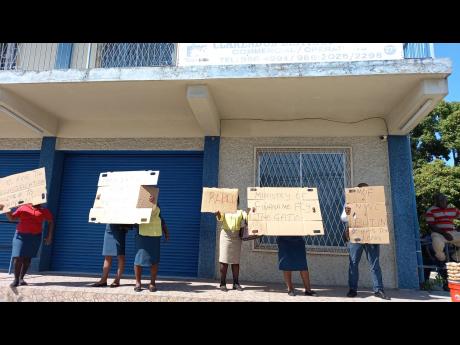 After 16 hours of meetings, industrial action taken by more than 2,000 workers of the National Water Commission (NWC), has ended.

The employees are expected to work starting with today's night shift, which begins at 11 p.m.

Labour Minister Karl Samuda says a back to work agreement was reached this afternoon between the NWC and the five unions representing the workers, following 16 hours of meetings.

The workers went on strike yesterday demanding action on the government over an outstanding reclassification from 2008 and their non-inclusion in the ongoing review of public sector compensation.

According to the signed agreement, obtained by The Star, a compensation review is to be done and implemented within six months.

1. Resumption of work and normalcy will be restored islandwide starting with night shift today

3. The exercise will consist of a steering committee involving each of the five unions at the NWC for further local communication and consultation

4. The Ministry of Finance and the Public Service shall provide the final organisational structure of the NWC to the unions by the first meeting of the steering committee scheduled for Friday, May 20

5. The Ministry of Finance and the Public Service will provide the report of the market survey that was conducted of private sector companies by May 20, 2022

7. There will be no victimisation on either side arising from the industrial action

Earlier today, Prime Minister Andrew Holness appealed to the NWC workers to return to work because they now have the attention of the government regarding their "valid concerns".

"Get back to manning our water stations and returning water, this essential commodity, to our citizens, our business, to our schools, hospitals and all our endeavours," Holness said at a leadership retreat in Hanover for members of the Ministry of Economic Growth and Job Creation that he leads.