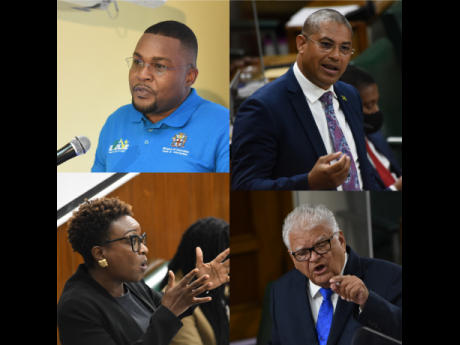 Some of Jamaica’s political leaders have had contrasting responses to the latest bout of unrest in the public sector. On Thursday, dozens of air traffic controllers went on strike, crippling operations at the country’s two major airports.

Here is a list of some of the political responses:

In a statement, Samuda explained the issues highlighted by the controllers are currently before the Industrial Disputes Tribunal being addressed.

"I am encouraging the Tribunal to take the appropriate steps to ensure normalcy is returned to the country’s airports,” Minister Samuda concluded.

Opposition Spokeswoman on Tourism, Senator Janice Allen has called on Minister of Tourism Ed Bartlett to lead the charge on behalf of the Tourism Industry in resolving the impasse with the traffic controllers.

“This Government has consistently shown a lack of regard for workers, but the industry cannot survive without the workers as the big companies alone cannot do it”, she said.

Allen also said the workers are key players in the tourism industry, stressing the importance of having a resolution urgently.

She added that the tourism industry trying to recover from the pandemic cannot now afford any further disruptions.

Opposition spokesman on Transport, Mikael Phillips, says the strike and the resulting disruption of Jamaica’s air services were preventable.

“The Ministries of Finance and Transport must take full responsibility for the closure of the island’s air space and the massive economic and security fallout which will inevitably occur,” Phillips said.

The spokesman says there had been loud rumblings and enough time to hear and settle the concerns.

He said, had the government acted on several warnings over the past week and had taken the necessary actions, the situation could have been prevented.

On Twitter, Minister with responsibility for information Robert Nesta Morgan tried his best to paint the severity of the industrial action and its repercussions on Jamaica via a series of tweets.

“Some stats to give context of the risk we now face: persons now either stranded or can’t book flights – 12000. Expected persons to fly between now and weekend – Approximately 30,000 tourists and locals. Projected losses - US$ 48m or j$7.2 Billion,” Morgan tweeted

Morgan was also kept busy responding to critics over the state of governance leading up to the recent strike by National Water Commission workers.

“You hold a lot of power in this space and I respect your talent and work. Just do better please. Do some research before you parrot misinformation,” Morgan said in response to popular podcast host Kareem ‘bwoyatingz.’