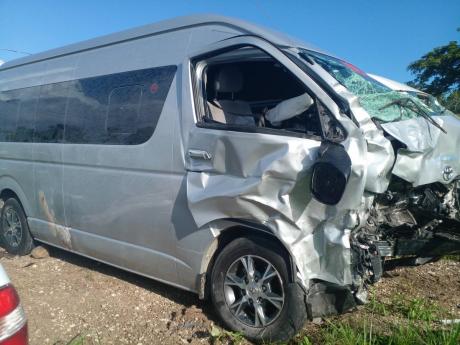 The JUTA bus which was involved in the crash along the Barbican main road in Hanover.

Three unidentified men, believed to be gunmen, died in a motor vehicle crash along the Barbican main road in Hanover yesterday.

Four tourists and a tour bus operator also received injuries and had to be treated at hospital. Investigators also reported that two illegal firearms, a 9mm Single Action Browning pistol, and a 9mm Beretta pistol were taken from the three men. Reports by the Hanover police are that shortly after midday, the three men were travelling in a Nissan Latio motor car heading from Montego Bay to Westmoreland.

While travelling along a section of the Barbican main road, the men allegedly were alerted of a police spot check that was ahead of them. The driver reportedly turned the vehicle and headed in the opposite direction. The driver lost control and collided into a JUTA tour bus which was transporting four tourists from Montego Bay to Negril. The injured were rushed to hospital where the three men were pronounced dead and the tourists and JUTA driver treated. An off-duty police officer who was travelling along the roadway cordoned off the scene which allowed his colleagues to successfully recover the illegal firearms. Commanding Officer for Hanover Sharon Beeput commended the officers in acting swiftly.

"Well the tourists and the tour bus operator's injuries are not considered life threatening, but they are receiving medical attention at a medical facility," she said.

Beeput also called on the police in the parish to keep up the high standard of policing which they have been displaying while performing their daily duties despite the challenges.