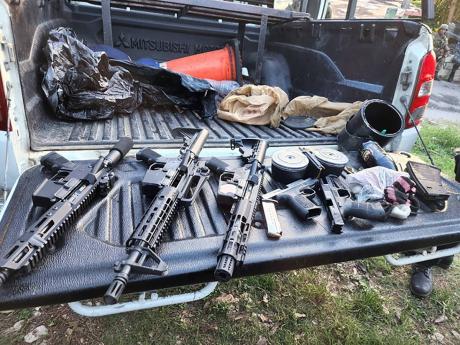 Guns recovered by the St James police in Salt Spring on Tuesday.

The St James police seized three high-powered rifles, two handguns and a large quantity of ammunition during an operation carried out in the Go-Peace area of Salt Spring on Tuesday.

Several men were also picked up during the operation, but so far no one has been officially charged in connection with this latest seizure. Reports are that officers drawn from the St James Special Operations Branch and members of the Jamaica Defence Force went to Go-Peace and carried out a number of searches. The lawmen discovered three M-16 assault rifles, two 9mm pistols, several high-capacity rifles, and a large quantity of assorted 5.56 and 9-mm rounds. This latest gun find comes four days after lawmen intercepted a motor vehicle along a section of the North-South Highway, and seized three high-powered rifles, five 9mm handguns, and more than 440 assorted rounds of ammunition.

Also on Tuesday, Police Commissioner Major General Antony Anderson commended the police and military on their most recent seizure, and indicated that since the start of June, 27 weapons have been taken off the nation's streets. Anderson also stated that up to the end of May, 320 illegal firearms have been seized across Jamaica, which represents a two per cent increase compared to the corresponding period last year. He also said that 6, 380 rounds of ammunition have also been seized since January, representing a 4.2 per cent increase over the corresponding period last year.