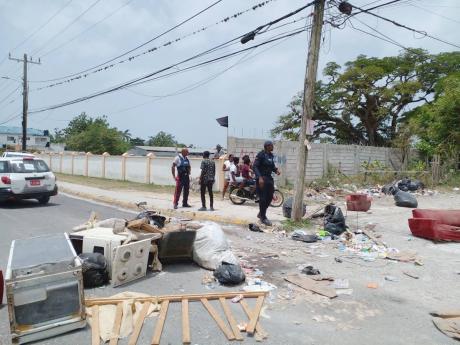 Police seek to clear the roadblock set up by yesterday by angry residents of Dalling Street in Savanna-la-Mar, Westmoreland, who protested the lack of electricity which they said they did not have from Sunday.

Several disgruntled residents of Dalling Street, Savanna-la-Mar, Westmoreland, are demanding compensation from the Jamaica Public Service Company (JPS) as they were without electricity from Sunday, causing them to lose thousands in grocery items.

Some residents took to the streets yesterday morning in protest, using debris to block the main road leading to and from the community. The electricity was returned in the afternoon.

"Wi glad fi get back the light, yes, but a who gwan responsible fi gi wi back all the money worth a items which wi lose over the past four days?" one resident, who gave her name as Velma, asked. "A whole heap a wi lose wi supermarket goods, milk, juice, fish, meat, and vegetable. All a dem spoil and up to now wi cah hear from JPS or hear wha cause the light fi go weh fi days."

Another resident Kisha-Ann Pinnock told THE STAR that she has lost close to $100,000 worth of chicken and other meats, which she has been forced to dump.

"This is what I do for a living. It provides for me and my 12-year-old son and also for my two nephews who I have been caring for since their mother died some time ago," Pinnock said.

During the protest, a team of police officers arrived, followed by JPS workmen. The workmen left but later returned and after working for more than an hour, electricity was restored.

Meanwhile, the JPS, in a release, said that it received a report of the outage on Tuesday from one resident. The company said that workmen who went to address the issue yesterday encountered a road block and a boisterous group of demonstrators who claimed that they had no power since Sunday.

"The crews therefore left the area due to security concerns. The company wishes to make it clear that it had no reports even up to this time of writing of any community-wide outage, or even several customers being out of power. As soon as it was safe to do so, the teams returned and sought to address the matter at hand," the company said. JPS said power was returned at 3 p.m.