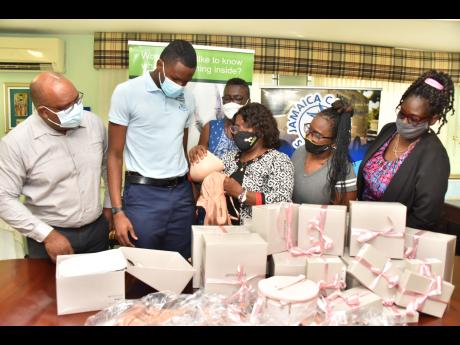 Eighteen-year-old Hillel Academy student, Derick Bernard (second left), looks on as breast cancer survivor Hygena Reid (third left), examines some of the support items which he donated, during a handover ceremony at the Jamaica Cancer Society (JCS) in St. Andrew on June 27. Looking on are Acting Executive Director of the JCS, Michael Leslie (left), and other cancer survivors.

After researching the subject, he learned of the trauma breast cancer survivors experience and has raised over $100,000 of much needed support for them.

The sixth form student at Hillel Academy in St. Andrew is now an ambassador for breast cancer survivors and wants other young men to join the cause, to support and raise funds for women who are fighting the disease.

He describes the campaign as “all about giving back to the community.”

“Anybody can be a light in their own little corner. Breast cancer is the leading cancer in women, and, at times, these women have to do surgeries and might lose the breasts. So, with this knowledge, I sought the sponsorship,” he stated, while presenting 15 survivors with support items at the Jamaica Cancer Society in St Andrew on June 27.

The items included breast prosthesis and bras that are worn by cancer survivors.

Diagnosis of the disease can result in a woman doing a unilateral mastectomy, where one breast is surgically removed, or a double mastectomy where both are separated.

This can lead to depression and despair, as the new change to the body’s physical appearance is sometimes devastating for a woman.

The costs for recovery are huge, and many women are unable to afford reconstructive surgery or a prosthesis, a breast form which helps to enhance their appearance.

Young Derick said he wants to have a “long-term relationship” with the Jamaica Cancer Society, “in which we can help others in need [and] help women build back a piece of themselves.”

The student further stated that with support from donors, even when he settles in his profession, it is a mission that he wants to continue.

The Ministry of Health and Wellness advises that breast self-examination is critical for women and men to undertake monthly. They can follow the procedure on the Ministry’s website- www.moh.gov.jm.

Breast cancer survivor, Hygena Reid, indicated that the prosthesis and bras will help her “a lot, and I really appreciate this, because I didn’t expect it.” Another survivor, Eulalie Callum, noted that the items will bring happiness to her life.

“Because the prosthesis, sometimes, makes a woman feel complete, after she loses a part of her. I am very thankful for Derrick taking the step to help. There are a lot of women in Jamaica who really need this help,” she said during the brief handover ceremony.

Acting Executive Director of the Jamaica Cancer Society, Michael Leslie, noted that when an 18-year-old can “step up, and think about our ladies, this has to be historic.”

“It warms my heart that 15 ladies can [now] walk proudly in confidence,” he told the audience.

The Health Ministry recommends other simple steps to detect the cancer, which can make a difference.

These include standing before a mirror and looking at the skin of the breast and trying to identify indicators such as dimpling, scaling, redness or any discolouration; examining the shape of the beasts, first with both hands pressing behind the head, and then placed on the hips, the left arm should be raised and the left hand placed firmly behind the head; using three or four fingers of the right hand to explore the left breast in a circular motion, starting from the outer sections of the breast, and moving towards the nipple.

However, screening is regarded as the best way to identify cancer in its earliest stage, often before symptoms surface.

“Though screenings are a vital aspect of comprehensive health care, many people either delay or avoid getting screened for cancer for two main reasons - the cost, as a major factor, and the fear of hearing the worst,” the Ministry notes.

Breast cancer patients registered with the National Health Fund (NHF) can have their cancer receptor studies done at a reduced cost at the University Hospital of the West Indies (UHWI) Pathology Laboratory.

The diagnostic test is subsidised by $4,800 each. The procedure is essential for accurate diagnosis and effective treatment.

The Jamaica Cancer Society is a non-profit, non-government organisation, which was established in 1955 with a mandate to contain cancer in all its forms.

Through its mission ‘to eliminate cancer as a major health problem in Jamaica’, it provides the public with a range of cancer tests for the breast, cervix, uterus, and prostate, at a highly subsidised user fee.

Its ‘Relay For Life’ programme is used at the community level and at large gatherings to raise funds for the work it does to support survivors, and increase cancer awareness.

The Society also has the ‘Reach to Recovery’ initiative, which comprises breast cancer survivors who volunteer much needed support for others, is largely backed by the private sector.

The Jamaica Cancer Society is located at 16 Lady Musgrave Road in St Andrew, with outlets in St Elizabeth and St Ann.

Other aspects of its work can be found at www.jcs.live.