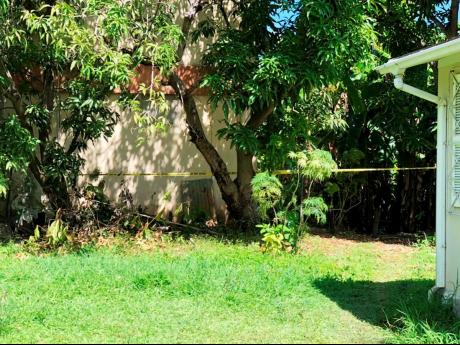 The crime scene in Savanna-la-Mar, Westmoreland, where the body of 17-year-old Jayre Francis was found.

A 17-year-old boy was shot and killed by gunmen within the zone of special operations (ZOSO) in Savanna-la-Mar, Westmoreland, on Thursday morning.

He has been identified as Jayre Francis, otherwise called 'Jay' of Ricketts Street, also in Savanna-la-Mar. Reports by the police are that shortly after 3:15 a.m., Francis was chased inside a yard along Ricketts Avenue and shot multiple times by armed men. Residents alerted the police after hearing the gunshots, and upon their arrival, Francis was discovered lying in a pool of blood beside a house with multiple gunshot wounds to his upper body and a number of .40 and 9mm spent shells on the scene. The scene was processed and the body removed to the morgue for post-mortem.

THE WEEKEND STAR caught up with Senior Superintendent Wayne Josephs, who is the commanding officer for Westmoreland, who described the incident as a most unfortunate one.

"Prior to the zone being established, that area that is under the zone was the hottest area in the parish and I believe that up until this time last year, we would have had over 13 murders in the area where the zone was established," he said. "Now we had one murder and we are currently trying to review and assess what might have gone wrong. Sometimes all it needs is for a review and an assessment and a realignment or redeployment of the assets that you have, to see to it that they are properly utilised."

He added that over time residents have expressed that they are happy and feeling safe in the ZOSO, as they can now commute freely in the community.

Seventy-three persons have been killed in the parish since the start of the year.