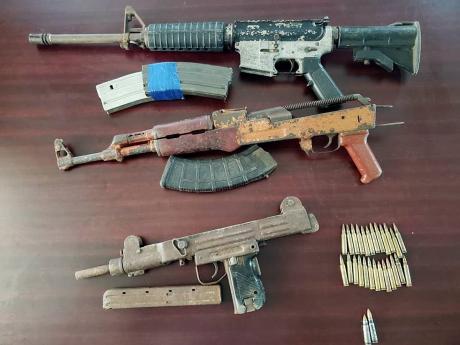 Photos of the three illegal weapons and ammunition seized in St James.

The St James police seized three high-powered weapons, several rounds of ammunition, and took several men into custody following an operation carried out in the Canterbury community on Tuesday.

Commanding Officer for the St James Police Division, Superintendent Carlos Russell, told THE STAR that the operation was a success and appealed to persons to cooperate with the lawmen.

"In a bid to rid the streets of illegal firearms, we are asking the citizens of St James to continue to support us, to tell us what you know, or you can call 311, or 119," he said. "We are continuing to do our operational activities, targeting the gangs, and we believe that in removing the firearms from the street, it will save lives."

Reports are that about 5:30 a.m., a joint police-military team carried out an operation in sections of Canterbury community, where the weapons and 27 rounds of ammunition were seized. The police also reported that more than a dozen men who are believed to be part of the infamous Crocks Nation Gang were taken into custody.

Assistant Superintendent Theodore Hayles, who presently acts as the operations officer for St James, told THE STAR that the operation was targeted at arresting gang members.

"During the operation, three illegal firearms were seized, one AR-15 rifle, one AK-47 rifle and one Intratec submachine gun. Along with those weapons, we also seized 25 rounds of 5.56mm cartridges, commonly used in the AR-15 and the M-16 rifle, and we also seized two 7.62 rounds used in the AK-47 weapon," he said.