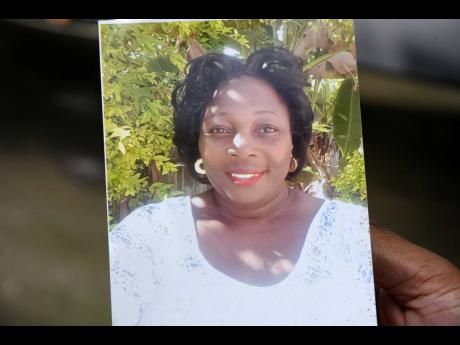 Photo of Denise Bell, who was murdered in Seaforth on Saturday.
1
2

The killing of four persons in St Thomas on the weekend has pushed murders in the parish to 25 for 2022, a 61 per cent increase on last year's figures during the corresponding period.

A common-law couple, Jermaine Jeffrey, 41, and Denise Bell, 50, were murdered on Saturday in Seaforth, a day after Andrew Mullings, 21, and Under-17 footballer Jedine Carr were also killed by unknown assailants in Yallahs. Divisional commander, Superintendent Allison Byfield, told THE STAR that she was concerned with the level of criminality in the parish and said that immediate action was needed to cauterise the bleeding. She noted that the majority of the killings, 11, have taken place in Seaforth. She said a perennial war between men from Navarre Lane and Black Smith Lane is the source for the mayhem.

"We do have challenges but we have to go back to the drawing to devise strategies for the entire Seaforth police area. We will continue to push our resources in the area to stem the flow of criminality. The truth is Seaforth is the problem space because the other murders are at random areas across the parish," she said. "We are picking up persons and charging them because we are getting the information, but we realise that other persons are coming to the fore as soon as we take other persons."

Byfield also condemned the murders and vowed that she will "not allow criminals to operate freely in my division".

"We have not yet identified the shooter from Saturday but we are still probing and hoping we will be able to get some information on who those persons are. We have also not yet established a motive but we are hearing that there was some quarrel with persons in the area but we cannot identify who are the persons they were quarrelling with," she said.

According to the police's Corporate Communications Unit (CCU), Jeffrey and Bell were sitting in a motor car when a lone gunman came up at the fence of a neighbouring premises and opened gunfire at them. They were rushed to the Princess Margaret Hospital in the parish where they were pronounced dead.

The CCU also reported that on Friday night, Mullings was driving his Toyota Corolla motor car, which he operated as a taxi, along the Lloyd's main road in Yallahs. The police further stated that Carr and two unidentified men were passengers when explosions were heard and the vehicle spun out of control. The car crashed into another vehicle and a utility pole before overturning into a gully. Both Mullings and Carr were found inside the car with bullet wounds. The shooters escaped on foot.