Cops wary of possible flare-up after fatal shooting in Waterhouse 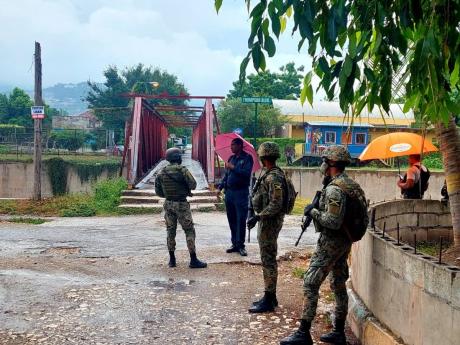 Residents of Unity Lane in Waterhouse, St Andrew, are cowering in fear following a drive-by shooting yesterday in which four persons were injured, one fatally.

The deceased, Alton Haffeden, 19, was reportedly travelling to work when he was struck by bullets at the 'Red Bridge' area that connects the Drewsland and Waterhouse communities.

The police, in a preliminary assessment, theorise that the shooting was a reprisal for last Saturday's stabbing death of Andre Douglas. Since Saturday, there has been talk in the community that men were hell-bent on avenging his death.

With regards to yesterday's incident, Senior Superintendent Kirk Ricketts, commanding officer for the St Andrew South Police Division, said the gunmen travelled in two vehicles and fired indiscriminately at a group of men standing along the roadway. Ricketts also confirmed that the accused man in Douglas' murder resided in the lane but has fled the community.

"So it is now a community versus community [conflict] and our task now is to see how best we can prevent reprisals going forward. But we believe it is a gang conflict stemming from some incidents that got worse on Saturday where a man was stabbed during a football match," Ricketts told THE STAR yesterday.

At Haffeden's home, relatives formed a ring of comfort around his mother, Rosie Dixon. She gazed at the clouded sky as police personnel asked questions about her son, who was a former student at Penwood High School.

"I don't even know what to say. Weh him a go out inna rain fi go wipe window fah? Him no see say rain a fall," the heartbroken mother remarked. She said that she could not believe that her son was dead because of a war that he was not involved in. Acting crime officer for the division, Deputy Superintendent Coleridge Minto, said that the police are hoping to make an arrest soon.

"We have intelligence regarding the persons who would have carried out this incident and we are following some very strong leads at this time. We have some leads as to who did the stabbing and we are in pursuit of a particular individual who we understand would have fled the area of his residence but we are following some leads. At an appropriate time we will release some names of the individuals," he said.

Minto also expressed a concern that this war may spark another flare-up of violence in his division.

"St Andrew South has over 70 gangs with over 50 of them being active and so with the number of gangs in this one division, you can understand the level of violence. Any potential conflict that exists you can end up get a reprisal of multiple casualties. And so we have a joint military presence in a number of the hotspots and certainly we have increased our presence in this area and will continue as well as to strengthen our investigative capacities. We are always planning and putting together strategies that deal with our serious gangs," he said.

According to police statistics, between January 1 to July 16, there have been 68 murders in the division, a 31 per cent reduction in numbers when compared to the corresponding period in 2021.