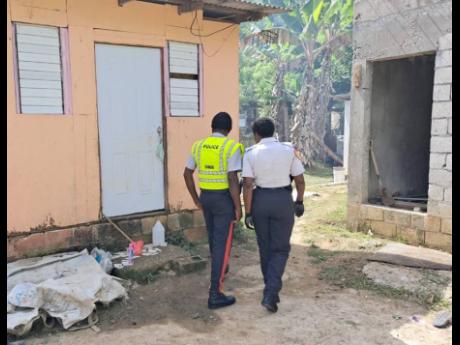 Two cops from the Sandy Bay Police Station in Hanover outside the house where Venesha Oreggio and her partner, Miguel Wilmot, were shot and killed on Monday morning.

Lloyd Oreggio, whose daughter Venesha was murdered along with her boyfriend in the Pumpkin Bottom community of Sandy Bay, Hanover, on Emancipation Day, believes that she was very unlucky with men.

The 35-year-old shopkeeper and her 30-year-old common-law husband Miguel 'Elder' Wilmot, who was a construction worker, were gunned down about 3 a.m. by men posing as police officers. Reports by the Sandy Bay police are that Oreggio and Wilmot were at home in bed when they were awakened by loud knocking at their two-apartment board dwelling by men who identified themselves as cops. The men ordered Oreggio to open the door and after she did, they opened gunfire killing both persons on the spot. The gunmen ransacked the house and made off with an undetermined sum of cash. Lloyd told THE STAR that his daughter, who had five children, was unlucky in love.

"One of har bayfather get stabbed to death few years ago in Haddington, Hopewell. Then har other babyfather and him brother get kill right a Pumpkin Bottom yah suh," he said. "And now she come meet her death wid this yah man right yah suh. She never did lucky wid man at all."

The bloodletting did not stop in Hanover on Emancipation Day as detectives had to make their way to an area of Sandy Bay known as Barbican. It is reported that 29-year-old Omar McDonald, labourer of Barbican, was also asleep at his home when gunmen rode to the community on motorcycles. They forced their way inside his house and opened gunfire, hitting McDonald multiple times. They then proceeded to search the house before escaping on their motorcycles.

When contacted, the Hanover police say they have not yet made a breakthrough into these killings which have taken the parish's murder tally to 25.