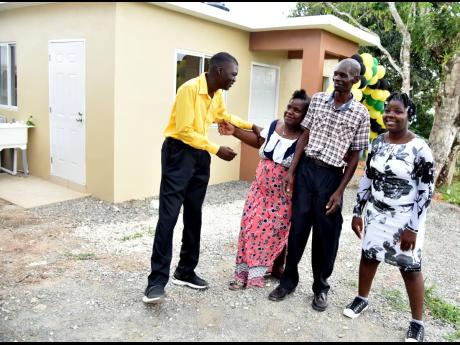 The Tucker family (from left) Delano, Nattris, Denisha, and Desmond were overcome with emotions after receiving their new home. 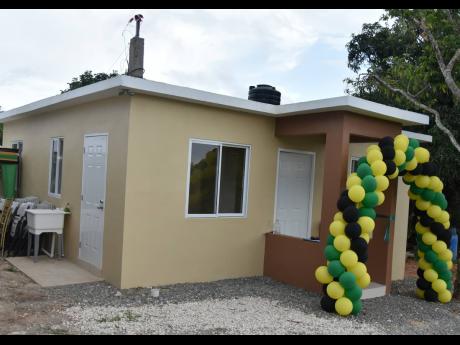 The Tucker family was gifted a new three-bedroom house under the Social Housing Programme.
1
2

In two weeks when Delano Tucker leaves his family to start his career as a student of the College of Agriculture, Science and Education (CASE), he will no longer have to worry about where and how they sleep at nights.

The Tucker family was the latest recipient of a home under the government's New Social Housing Programme. The family garnered much attention in March after a video from Street Driven.tv, which explored the deplorable conditions in which they were living, went viral. Despite the challenges, Delano was getting top grades at Guy's Hill High School. Though much of the mini documentary's content was heartbreaking, the two-room structure which the Tuckers called home moved many Jamaicans to action. Just days after the video was posted, people from all walks of life, started turning up at the family's home in Guys Hill, St Catherine, with money, food and even material to build a new home.

On Thursday at the handing over ceremony of the three-bedroom structure in Seafield, St Catherine, Member of Parliament for St Catherine North Eastern, Kerensia Morrison, expressed her gratitude for the outpouring of love that the family has received.

"I also want to thank all Jamaicans who have shown love. The outpouring of support to the Tucker family, it was staggering, Jamaicans both locally and abroad," she said. "I was touched by the level of support, how they rose to the occasion to come through for a family who they felt was in need."

At the ceremony, the usually silent patriarch of the Tucker family, Desmond, was a ball of emotion, often having to dab his dampening eyes.

He told THE WEEKEND STAR, "It was a dream that finally come through. I just want to say a big thank you to all those who help us through our crisis and willing to continue help us and help others."

Though Delano only has two weeks to enjoy his new room until he is off to Portland, where CASE is located, he said that while he is a little nervous, he will miss his little sister Denisha most.

In his vote of thanks, the aspiring agricultural surveyor summed up their experience. "As we come down, we'd just like to say it has been a tough task but we pull through," he said.

Matriarch of the family, Nattris Tucker, in her usual brand of reserved glee, added "Today we are truly blessed and filled with joy for all the wealth of love, kindness and support that has been showered upon our family by all of you. We cannot express how grateful we are for all your support, your encouragement and assurance whether it was in cash or kind or just a word of compassion."