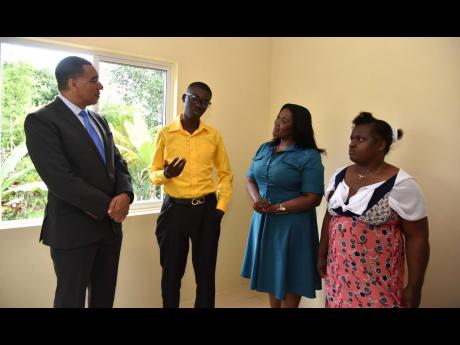 As Prime Minister Andrew Holness handed over the keys to the 84th house to be given away under the New Social Housing Programme yesterday in Seafield, St Catherine, he said all recipients must now become ambassadors of hope.

He was speaking at the handover of a three-bedroom abode valued at $6 million to the Tucker family, whose financial plight was highlighted earlier this year. Holness said the Government is introducing new stipulations to ensure that this donation will not be misused by any recipient in the future. The son, Delano, was especially featured as despite the family's rundown dwelling and lack of food, he was excelling in high school.

"You must now become ambassadors of hope. You must become now a beacon of good living and a beacon of good citizenship in your community," he said. Holness noted that in the past, recipients of housing donations have not used them for their intended purpose.

"Governments have given housing benefits before and when we go back go check on it, the beneficiary really need it and they take it and rent it out," he said. "Secondly we want to ensure that the beneficiary's family continues to benefit from the house even if the beneficiary passes on. Why? Because this intervention is designed to break what we call inter-generational poverty."

The prime minister said one of the ways the Government will safeguard the integrity of the programme is to have beneficiaries sign a contract.

"With other programmes going forward, while we are handing over some of the houses, we are now going to introduce a new element, in that, the beneficiaries will be required to sign what we call now a social contract. Meaning that they agree to first and foremost take care of the house," he said.

Though highlighting the new requirements, Holness said he had every confidence that the Tucker family would be good examples of good beneficiaries for the programme.

"I am certain based upon what I have seen of Delano that he is going to do great things for this country. I am only now just learning of his equally studious sister who will also do great things for this country. So I am confident that this small investment will be repaid multiple times over by their contribution and what they will do for their country. I want to encourage the family to stay together, keep working hard and keep being an example," he said.