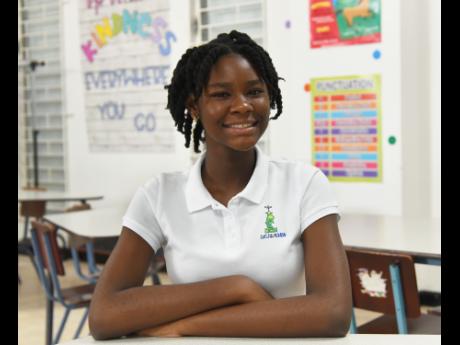 Top Girl for the 2022 Primary Exit Profile (PEP) examinations, Leah-Simone Powell, achieved an overall score of 398.3, with 400 being the perfect score. She was placed at Campion College in Kingston. (Contributed photo)

Jamaica’s top girl for the 2022 Primary Exit Profile (PEP) examinations, Leah-Simone Powell, says her drive for academic success will continue to fuel her efforts throughout high school and beyond.

The self-motivated 12-year-old student, who was also President at her former school, Reach Academy in St. Andrew, topped the list of over 17,000 girls who took the PEP examinations this year, achieving an overall score of 398.3.

For the 2022/23 academic year, she began her high school journey at Campion College, in Kingston, which was her first choice.

Leah-Simone told reporters that although she is not currently sure about a career choice, excelling in her academics will remain a priority.

“I feel very proud of myself when I get good grades and it makes me want to keep on doing it, because it makes me happy,” she said.

Her preparations involved tailored PEP lesson plans prepared at her school, extra lessons outside of school hours and daily study groups with her friends.

Leah-Simone said she was not expecting to become the top girl in the nation, but her father, Leo-Paul Powell, noted that “[her results] were simultaneously surprising and entirely predictable”.

“The consistency of her performance over time would lead you to believe that she could have become the top girl and in fact [she] executed perfectly,” he said.

Mr. Powell said that despite her academic excellence, they never thought it was necessary to pressure her into always achieving the highest grades.

“We just provided a good support system for her. Apart from that, we selected the right set of teachers to guide the process, along [with] the right institution…we just let it happen,” he said.

“We insist that she puts her best effort into whatever project she decides to execute and accept whatever the outcome is, with a fair degree of certainty that it’s going to be good. But we [do not] have any preconceived notion of where she's going with her life. We're just here to support her ambition,” Mr Powell added.

Her mother, Tracia James-Powell, said trusting Leah-Simone’s intuition also played a great role in the support system they built for her.

“You have to know [your] child [and] once you [do] then you will know how far you will need to go. If she says to you, ‘I am feeling overwhelmed’, then you are going to be able to pull back. [You are] allowing her to know that you trust her,” she told reporters.

Mrs James-Powell said that engaging Leah-Simone in decisions about her education also helped to build her resilience and determination to do well in her studies.

“So, we’ll give her some autonomy, so she doesn't feel as if it's always a parent making all these decisions without consulting with her. We [do not want] her to feel as if she doesn't matter in the decision-making process …and I think that helped,” she emphasised.

“I was blessed with a very good cohort of students. They were motivated, they worked well together, and I saw Leah-Simone take on a lot of the team meeting’s work. She's the kind of student who wants everyone in the classroom to do well and I found that to be very exemplary,” she said.

Ms Morris said that teachers should always have a vision for their students, to better aid in their exam preparations.

“It doesn't matter the cohort you get, once you have a vision and you're working towards it, it actually makes it a little easier, because you're looking at the outcome… what you'd want to see at the end of the school year,” she added.

Principal of Reach Academy, Vanessa Khouri Salazar, said the school remains dedicated, alongside its teachers, to see to the continued success of all its students.

“What we experienced through the pandemic, having to pivot and having to evolve into something that we've never done before, was liberating [and] showed we can do it all,” she argued.

The Principal lauded Leah-Simone as the “true meaning of a leader,” and remains confident in her long-term academic success.