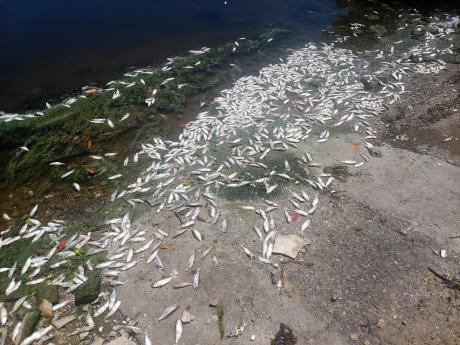 Scores of dead yellow-tailed sprat line the shores of Dawkins Pond in Edgewater, Portmore, creating an unbearable stench for residents. The National Environment and Planning Agency and the National Fisheries Authority are investigating the fish kill. 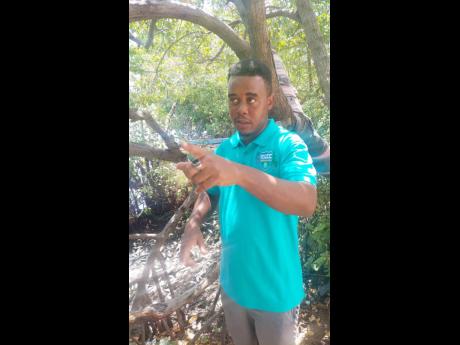 The National Environment and Planning Agency (NEPA) says it is working assiduously with the National Fisheries Authority to determine the cause of a fish kill in the Bridgeport area of Portmore, St Catherine, earlier this week. The area of concern spans the Dawkins Pond in the vicinity of Edgewater, and extends to Forum Beach.

Richard Nelson, senior environmental manager at NEPA, said samples of the seawater and the fish were collected and sent for testing.

"At this point we are yet to determine the cause(s) as we are awaiting laboratory test results on water quality and fish samples collected," he said.

What appeared to be hundreds of yellow-tail sprats were seen washed up on the shores. Some were floating in the water.

A woman, who lives in close proximity to the sea, said this is not the first time she is seeing dead fish in the water, but this is the worst.

Environmentalist Jason Wynter, who lives in the area, said that when he noticed the stench on Wednesday he initially thought it was coming from his turtle tank. However, he later realised that hundreds of dead fish were floating in the sea.

"It's a really terrible situation with the fishes. Residents said the first sign that they there were crabs coming out of their holes and coming on the shoreline. About five minutes later the fish started popping up. The water must have been contaminated for the fish to be destroyed, so I am waiting on the relevant authorities to do their investigations to find out what is the cause," he said.

Gary Smith, a fisherman, said the fish kill has greatly impacted their livelihood.

"From yesterday (Wednesday) mi a wonder how the place smell suh, and a today (yesterday) when mi a come in mi see di whole heap a dead fish, and di place extra stink yah now.