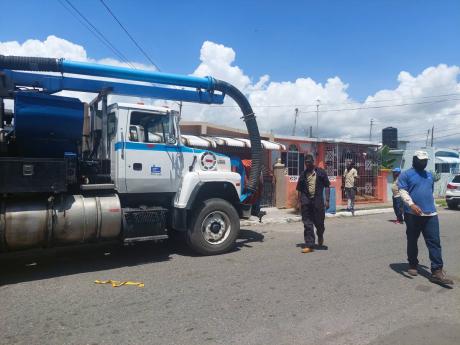 Panties, brasseries and other items of clothing were removed from a sewer line in a section of Waterford, St Catherine, by The National Water Commission (NWC) contractors on Thursday.

The workmen were called into action after residents complained about raw sewage flowing from manholes, which made its way into some of the yards.

"Is over a dozen panties we find," a crew member said, adding that several discarded underpants, shirts, pants, wipes, diapers and plastic bottles were removed from the lines.

"A bare a dem tings deh a clog up the sewage line dem. More time a just bottle pon bottle. Every piece a clothing item you can think of we take it out of here ... All slips and tights."

Dijon Grant, a resident of Waterford, is among the many residents who suffer the discomfort and face health risk as a result of the sewer lines being blocked. He said that residents have to deal with the awful stench of raw sewage even as they try their best to avoid making contact with the germs-filled water.

"It has a really bad odour and its not healthy for us. There are times when even the homes are blocked up and the bathroom and shower and so forth," Grant said.

He continued: "Even when cars are passing sometimes it splash up and leave some faeces here, and it's really disgusting," Grant said.

St Catherine South East Member of Parliament (MP) Robert Miller, who visited the community yesterday, said the discovery by the NWC crew is yet another reminder that persons must be mindful about the things they put the sewer systems.

"The bras, underpants, bottles etc. have no place in the sewage lines, so we have to dispose of our waste in the correct format. Everybody have a part to play in the sewage issue," Miller said.

The NWC, through its corporate communications manager, Andrew Canon, said a "high volume of non-biodegradeable material along with channelling of storm water into the sewer continue to be problematic" for the utility company.