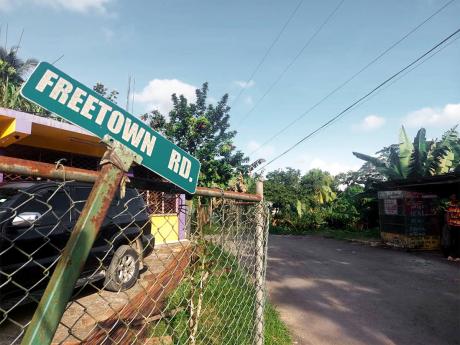 Roadway in Glengoffe leading to the place where a man was murdered, allegedly by his brother, at a grave-digging Wednesday.

The usually quiet Free Town in Glengoffe, St Catherine, was rocked by violence on Wednesday, following the slaying of a man at a grave-digging in the farming community.

Police said that 42-year-old farmer Noel Phipps, otherwise called David, was shot and killed, allegedly by his younger brother, who is now on the run.

One resident said the incident has left the entire community in shock.

"A bredda shot bredda. It kinda shake up the place a bit because round here usually quiet. Nothing nuh gwan round here suh," the resident said.

According to the Above Rocks police, about 10:30 a.m. on Wednesday, Phipps was at a gravesite when an argument developed between the brothers. The argument escalated and his younger sibling pulled a firearm from his waistband and fired several shots at Phipps.

The police were alerted, and on their arrival, Phipps was seen lying on the ground with multiple gunshot wounds to his upper body. He was transported to hospital where he was pronounced dead.

The killing is yet another domestic dispute to take a deadly turn on the blood-soaked island. Police Commissioner, Major General Antony Anderson, has been expressing concern about the high level of interpersonal violence in Jamaica. He said that 71 per cent of murders this year are gang-related, while 15 per cent stem from interpersonal conflicts.

Yesterday, when THE WEEKEND STAR visited Free Town, residents and family members were tight-lipped stating that they had no idea about what transpired.