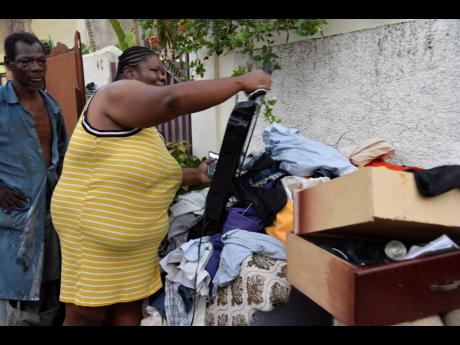 Pauline Edwards, one of the nine victims of a blaze in Standpipe, St Andrew, is thankful no lives were lost in yesterday’s fire. 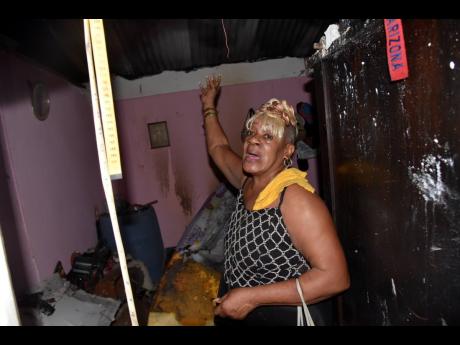 Geneveve Findlay said she recently renovated her property, which was destroyed by fire yesterday.
1
2

In a section of Standpipe in St Andrew, four families are entering the rainy weekend without homes to call their own following a fire that consumed almost all their belongings.

Pauline Edwards, who occupied her house for more than 35 years, said despite the devastation, she is happy no lives were lost.

"Honestly, me feeling good because nuh life nuh lost. So in everything we affi just gi God thanks and thank God fi mi community people them who help me. If it wasn't for them, I don't know where we would be," Edwards said.

She was able to save some items of clothing and a few small appliances and pieces of furniture.

Geneveve Findlay, another fire victim, was able to save some of her documents. She told THE WEEKEND STAR she recently renovated the property.

"A last year mi fix the ceiling. Mi spend over $200,000 fi buy board and everything, and about two months ago mi paint it over," she said.

While shaken by the loss of her house, Findlay said she will not allow the situation to break her.

"It's one of those things you hear," she said. "Where there is life there is hope. In God I put my trust."

Findlay told THE WEEKEND STAR this is the second fire to devastate that section of the community.

"Two years ago one big fire ketch over dah yard deh and come over yah suh, but we never get none because the fire brigade come in time," she recalled.

She then gave out an uneasy laugh and said; "See it ketch we yah now".

The fire is believed to have been started by a child who was playing with a cigarette lighter. Nine people, including one child, have been displaced. The loss is estimated at $15-$18 million.