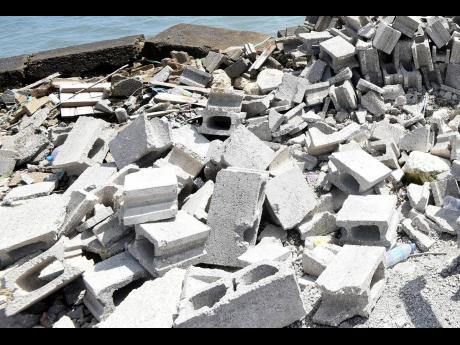 An 18-year-old youth has been hauled before the courts after he allegedly threw a half of a concrete block at his female cousin, hitting her on the head and causing her skull to fracture.

The complainant has asked the judge to order Dwayne Phillips to pay her at least $1.5 million in compensation.

Phillips pleaded guilty to unlawful wounding when he appeared in the Kingston and St Andrew Parish Court on Thursday. The court heard that Phillips was accused of stealing from his cousin on at least two occasions.

The complainant told investigators that she searched Phillips' bag and found her charger. She then told him that she would be attending the police station to file a report against him.

Phillips, according to the complainant, muttered, "Hey gal, if yuh come outta di yaad, mi buss yuh head." The complainant left the house, and a short while after, Phillips threw half of a concrete block at her. The missile hit her on the head, causing her to lose consciousness and fall to the ground. She was taken to the hospital by a passer-by.

A CT scan revealed that part of the complainant's skull was cracked and she received 10 stitches for the wound.

Senior Parish Judge Lori-Anne Cole-Montaque, having heard the allegations, was enraged. However, she expressed concern that some members of the society may be inclined to think the matter is not a serious one because the complainant did not die.

"When you hear that somebody get hit in them head with a block, we going say 'Well at least she nuh dead'. But I am sitting in this court every day and I hear the matters coming here and I am outraged. These are things that should cause outrage," the senior judge said.

Meanwhile, the complainant, in her victim impact statement to the senior judge, said she is not interested in mediating the matter with her cousin, and is seeking to be compensated.

"A nuh the first, second or third time. Me pay $26,000 fi doctor bill and me affi pay $1,500 every other week fi dress the wound. A eight days now me nuh go work, Your Honour, and I am not getting paid. Him tief from me nuff time, Your Honour. Him tief shoes, laptop and money. Him nuh affi stay in custody but me just would a want back everything from him," the complainant stressed.

The matter was adjourned until September 27 for the complainant to calculate her medical expenses.

Phillips was made the subject of a fingerprint order and was remanded in custody until then.