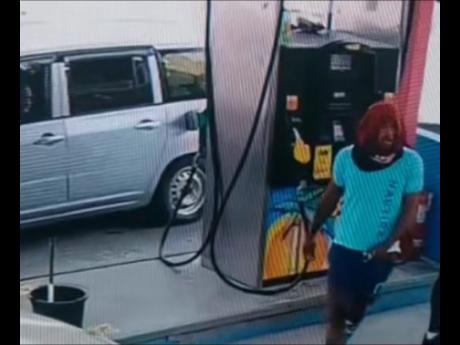 The police have confirmed that the man who was caught on CCTV footage robbing a Cool Oasis service station in St James has been arrested.

He has been identified as 25-year-old Akeem Bailey, otherwise called ‘Stamma’ of Albion Lane in St James.

Bailey gained notoriety after the footage of the robbery went viral on social media.

On Sunday, August 28, a man walked up to one of the pump attendants at the Cool Oasis service station, held her at gunpoint, and robbed her of an undetermined sum of cash.

After review of the CCTV footage, Bailey was identified, and arrested during an intelligence-driven operation in the Albion Lane community on Friday, September 23.

Bailey was charged with robbery with aggravation after giving a caution statement to investigators.

The police say he is also a suspect in connection with a string of armed robberies committed at service stations, a hair dressing parlour and gambling houses in St James, St Ann, Trelawny and Hanover.

The JCF is urging anyone who may have been a victim in similar fashion to report to the nearest police station or call 119.