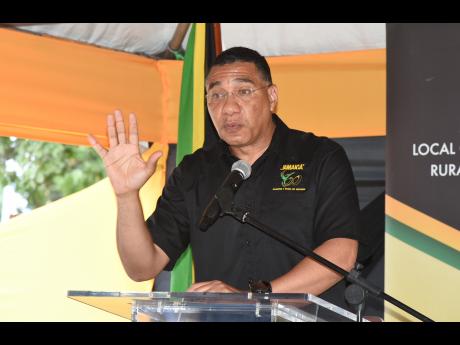 Prime Minister Andrew Holness speaking at the handover of an apartment complex as part of the Government of Jamaica’s social housing initiative, at Fourth Street, Belrock in Kingston on Friday, September 23. Contributed

Prime Minister, Andrew Holness, says that poverty is no excuse for having an illegal gun and using it to commit crimes.

Noting that the poor and vulnerable are those who are most affected by these crimes, Mr. Holness said it is no longer an excuse for youngsters “who claim that [because they are from] poor households and low-income families without opportunities, that the only way out is to get a gun”.

The Prime Minister was speaking at the handover of an apartment complex as part of the Government of Jamaica’s social housing initiative, at Fourth Street, Belrock in Kingston on Friday, September 23.

Prime Minister Holness said that the Government is aware of the challenging social circumstances that exist and “we are working to address both sides of the equation”.

“We’re treating with the social circumstances, and we are dealing harshly with criminal and violent elements in our [society] he noted.

He reiterated that the Government intends to initiate a gun amnesty, once the Firearms (Prohibition, Restriction and Regulation) Act is entered into force.

The legislation, among other things, establishes harsher penalties for offences connected to the illicit trade, manufacture, stockpiling, possession and use of illegal guns.

It was passed in the Senate on Friday (September 23) with 17 amendments and will return to the House of Representatives for approval. It will become law once it receives the Governor-General’s assent.

The amnesty will allow persons who are in possession of illegal firearms and ammunition to surrender these to the State without prosecution.

“The conditions of the amnesty would [allow you to turn in your illegal firearms], but after that period expires, if you are caught, you will face the full force of the new penalties, which could be up to life in prison,” the Prime Minister said.

“I want to again reinforce the point to those who believe that they have power because they have a gun… we are coming to disarm you. I am urging you... make the right choice,” he emphasised.