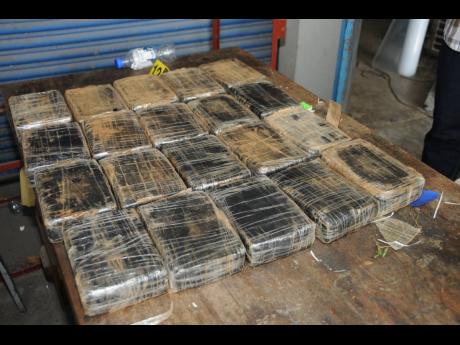 Criminal charges have been laid against the seven people who were arrested in connection with a $100-million ganja bust in Clarendon last week, the Corporate Communications Unit said.

The charges were laid on Monday after the seven, six men and one woman, were interviewed in the presence of their attorneys. The seven include Garrie Rogers, 43, a taxi operator of Mountainside district in St Elizabeth, who is charged with possession of, dealing in, trafficking and taking steps to export ganja. The others are facing charges of conspiracy to, dealing in and trafficking ganja.

They are: George Richards, 38, a fish vendor and Barrington Gayle, 45, a fisherman, both of Manchioneal; Emmert Saunds, 32, a taxi operator and Marvin Watson, 42, a National Water Commission technician, both of Scotts Run, also in Portland; Sidney Stevens, 42, a fisherman of Old Harbour, St Catherine; and Carol Kelson, 54, a farmer of Rowlands Fields, St Thomas.

They are scheduled to appear in the May Pen Parish Court on Thursday. They were taken into custody after the police intercepted a convoy of three motor vehicles in Clarendon Park on September 21. It's alleged that during a search of the vehicles compressed ganja weighing 1,200 pounds, with a street value of nearly $100 million, were found in all three vehicles.