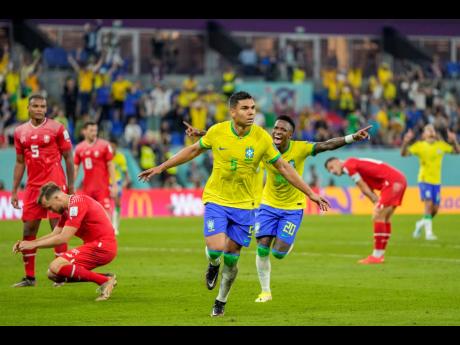 Brazil’s Casemiro (centre) celebrates after scoring his side’s opening goal during the World Cup group G match against Switzerland on Monday, guaranteeing the team a place in the knockout round. (AP Photo/Andre Penner) 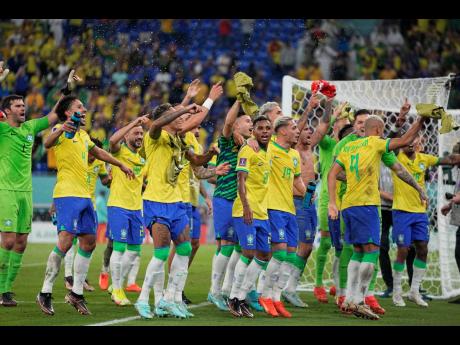 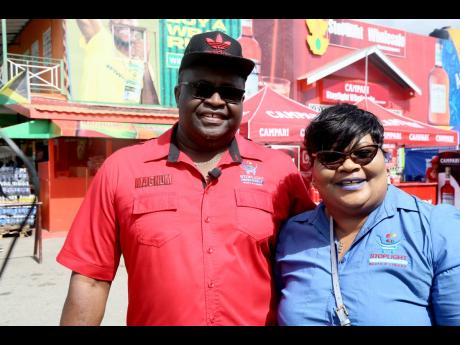 Junior and Jacqueline Wilson of Spotlight Wholesale in May Pen, Clarendon talk about the excitement that football, especially the World Cup, brings. Junior admits that he gets very nervous when watching his beloved Brazil play.
1
2
3

Junior Wilson is a savvy businessman when it comes to his Stoplight Wholesale, located on Manchester Avenue in Clarendon, but when it comes to the sport he loves, it is a whole different ball game.

The analytical and deliberate moves that ensure the company enjoys growth disappear as he watches his teams play. He is reduced to an uncertain, anxious, emotional human being as he sweats and awaits the final whistle. With his supportive wife Jacqueline by his side, Wilson, who declared his undying devotion to Manchester United and Brazil, shared his enthusiasm for the sport.

"When mi say mi tek it serious, mi tek it serious. I am passionate about World Cup and Brazil is my team," he informed. In 2014, Wilson made the trek to Brazil, anticipating that he would be in the country enjoying the excitement of seeing them lift the World Cup. Wilson and two other top wholesale operators made the trip which was sponsored by Red Stripe. Reliving his memories, he said the only thing he didn't like about the trip was the length of time it took to get to Brazil. He said he went with great expectations, wanting to see Brazil lift the cup, and for the most part his dreams stayed alive until the 7-1 thrashing from Germany in the semi-final. Brazil's main players, forward Neymar and defender Thiago Silva were both absent.

"During the match when it was apparent that they were losing and losing so badly, I felt terrible, I felt like crying. Some Brazilians were openly crying. We were over in the Red Stripe box so we had to have some to drown our sorrows," he shared, highlighting that even with the bitter loss, he still treasures the experience.

While he is an ardent supporter of Brazil and Manchester United, his wife Jacqueline roots for Manchester City, something her husband takes issue with, as he complains that "she is always going against his team". However, for the World Cup she has a "forced" peace treaty as she too is supporting Brazil.

"I'm forced to. The other day I went into the vehicle, it was decorated green and yellow and I said 'What is this?'" she said with a smile, adding that even at home their son has given in.

Still Wilson said even with their support, he cannot watch the match in their presence. He must retire to his 'man cave' where he can concentrate on the game.

"I take this serious. She might be in joke 'Oh what's the score?' but I am serious about my football so I can't watch my football with any other person. I lock in there and I concentrate like a me a help the players play," he informed. Wilson said that he doesn't want any noise, or anyone to disturb him as he is a bag of nerves.

"When mi a watch football, if you hide and watch you laugh after me. Emotions and even under the A/C mi a sweat, all a dem tings, and mi blood pressure go up and come down," he related.

Last Thursday, when Brazil first got into action against Serbia, he said he was confident but got "a little nervous" in the first half. But by the second half he was OK once more. Jacqueline shared that on Thursday, both customers and workers were hooked to the little TV that was placed at the front of the store.

"For a couple of minutes during the time there was nothing happening. Everything stood still. When the first goal scored, there was excitement," she said. She also informed us that she arrived at work to see everyone out in their Brazil colours.

With Brazil advancing to the second round on Monday after beating Switzerland 1-0, Wilson made a bold statement.

"Brazil will win the World Cup. Unfortunately, we have an injury to one of our best players Neymar, but they will survive. The quality of the team is that good. Brazil has the best squad, the best team at the World Cup," he said.