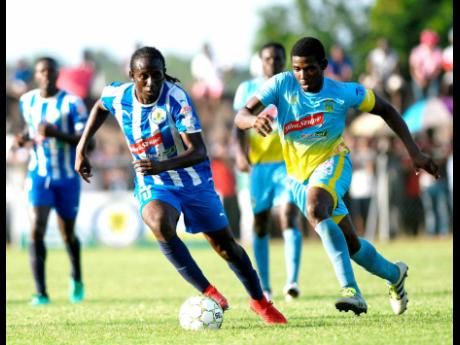 The final round of games of the regular season of the Red Stripe Premier League will be contested today and there is still a lot to play for.

Waterhouse (59) and Mount Pleasant (57) are hunting the final automatic semi-final spot as they vie for the second place in the points standing.

Waterhouse will play Montego Bay United at Drewsland, while Mount Pleasant take on UWI at the UWI Bowl.

Mount Pleasant will go into the game as the underdogs, while Waterhouse with their greater points difference are favoured to secure second spot.

Mount Pleasant captain, Ladale Richie, said the team would love for Waterhouse to drop points, so they can take advantage and climb to second. But he insists that his side is not entirely focused on that as they are looking to keep the momentum they have developed over recent weeks, going into the play-offs.

Richie said that he was still unsure if coach Donovan Duckie would rest players who are nursing injuries so they can heal fully for the play-offs.

Nevertheless, he believes that any 11 players selected to play are capable of getting the job done.

“Any team that goes out can get the job done. That (possible changes for game) is up to the coach. We take every game like any other and we are going for the three points,” he said.

Defending champions Portmore topped the league standings with 63, followed Waterhouse by 59, then Mount Pleasant with 57.

Fourth-place Cavalier can go neither up or down in the table as they are six points adrift of Mount Pleasant and five in front of UWI FC. However, sixth-place Arnett (45) can finish one place above their current position if they win and UWI (46) fail to take three points against Mount Pleasant.

While, Montego Bay’s relegation from the league is expected to be completed when they face Waterhouse in their game at Drewsland.

The St James club sit three points off Dunbeholden and even if they win today and Dunbeholden lose, they will need to score 16 goals against one of the league’s in-form teams to avoid the inevitable.