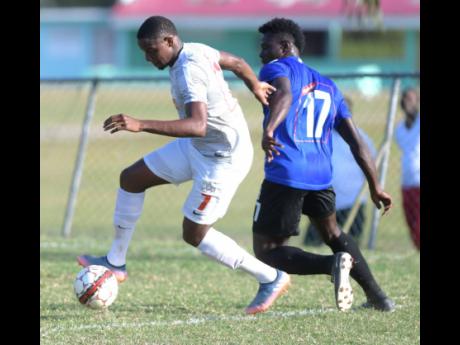 Since returning to the UWI team in the latter stages of the Red Stripe Premier League (RSPL) season, midfielder Ryan Miller has proven how valuable he is to this team.

In Sunday's quarter-final first-leg, he put in another man-of-the-match performance, his second since his return, to earn his team a valuable 2-2 draw with Mount Pleasant.

UWI took the lead through Ramoun Reid in the 21st minute, but Suealla McCalla restored parity on the hour mark for Mount Pleasant. However, seven minutes later, UWI received a penalty when Ricardo Campbell handled the ball inside the area. The former St George's College star then held his nerve and sent the goalkeeper the wrong way to put UWI back into the lead.

But that lead did not last long, as nine minutes from time, Francois Swaby was equally calm from the spot, after Mount Pleasant was awarded a penalty when Xavian Virgo was tripped inside the box.

But Miller, who coach Andrew Peart declared was the team's first choice penalty taker, showed no sign of nerves, as he dispatched the resulting kick with consummate ease.

"I was very confident," Miller told STAR Sports. "This is what I do in training every day, taking a penalty kick comes naturally.

UWI lost all three meetings against Mount Pleasant this season, without scoring a goal against the St Ann club and Miller said they were determined to overcome their poor run of results against the newcomers and believed that to do that, they had to get on the scoresheet first.

"The early goal (on Sunday) did settle the nerves, because we played three games against this Mount Pleasant team and lost all three and didn't score a goal. So the mindset today was to come out and get an early goal and take it from there and we did that," he continued.

UWI will travel to Drax Hall for the second leg of their quarter-final and will again start as underdogs for the contest, but Miller believes that if they can put in a similar performance and take the lead again, they can snatch the win against their more fancied opponent.

"We just have to stick to our game plan and work even harder than we did today and I think we can come out with the result we need," he added.