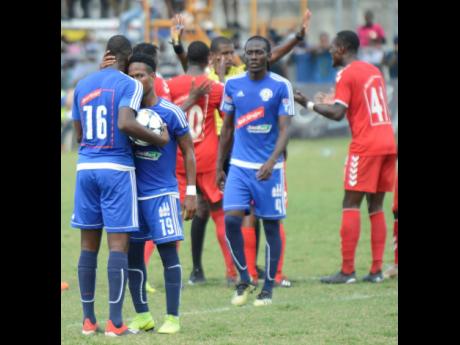 Mount Pleasant F.C’s Francois Swaby (left) and Cordel Benbow (second left) converse as their teammate Kesslon Hall looks on after their team was awarded a penalty in their quarter-final second-leg tie against UWI F.C. in the Red Stripe Premier League at Drax Hall yesterday. 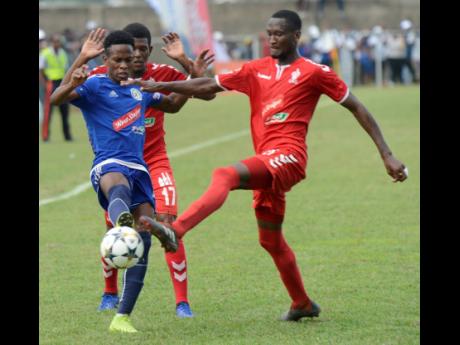 Cordel Benbow (left) from Mount Pleasant F.A. attempts to win the ball while under pressure from the UWI. F.C. pair of Stephen Barnett (centre) and Ramoun Reid (right) during the second-leg quarter-final tie at Drax Hall yesterday.
1
2

The Premier League debutants, who became the first newcomer to make the play-offs, will face defending champion Portmore in one semi-final.

And with the St Ann-based club dreaming of making history by winning the cup in their first season, assistant coach Nigel Stewart stated that they have to beat the best if they want to be the best in the country.

“We expect a good matchup, Portmore is a very good team. I think they are the most consistent team in the league, so we will go back to the training ground and get ready for Portmore,”he said.

“If we want to win the league we have to beat the champion and Portmore is the champion, so it doesn’t get any tougher than this. We have a good momentum going and we are playing well, so we are in a good feeling.”

Francois Swaby scored the game’s only goal from the penalty spot after 27 minutes when the ball was handled inside the box.

Mount Pleasant started brightly but UWI contained the early pressure before coming into their own.

However, it was the host who got the opening goal when Cordel Benbow’s shot hit a defender’s hand in the area and Swaby blasted home from the spot.

UWI created a few chances in the half but it was the host who finished stronger.

In the second half Mount Pleasant committed less numbers forward and were contend to play on the break and got a few chances but failed to capitalise.

UWI did all they could towards the end and nearly equalised but Xavean Virgo cleared the ball off the line.

“The performance was great over the two legs. We went behind and we found it hard to get back that goal. We know Mount Pleasant play well when they go up, we tried to prevent that but it was unfortunate that ball to the hand,” he said.