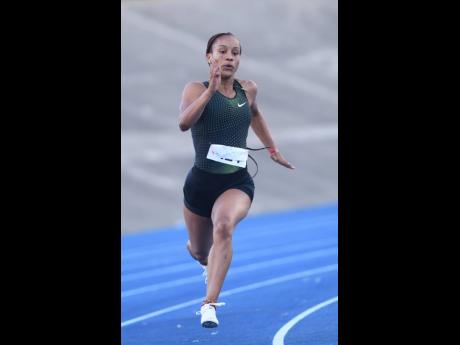 Briana Williams wins the Under-20 Girls’ 200m at the 2019 Carifta Trials in 23.26 seconds at the National Stadium yesterday.

Jamaica young female sprint sensation Briana Williams said her only disappointment at the just- concluded CARIFTA Trials was that she was not able to break the 23-second barrier in the 200m yesterday.

"It was a good one (race) as always and I'm glad to be out here this afternoon, I was pleased. But I was hoping to get 22 (seconds). I didn't but I am still pleased with my time," she told STAR Sports.

"I have been working on my 200 and everything's going good. I wanted to work on my drive phase (in 100m), especially, as it was my first 100 of the season yesterday and Friday. I didn't really get a great start but I am happy, it was a great one and I am glad I finished injury free."

Meanwhile, the young sprinter is still undecided as to whether she will compete in both sprint events at this year's Carifta Games set to take place in the Cayman Islands from April 20-22.

"I have Carifta next and that's about it. I am not sure (if I will do both events) yet. I will have to go over it with my coach. Today I was not really pleased but despite the negative headwinds, I think I came out here and did my best. Now my main target is to go to the Jamaica Trials for the World Championship, and, hopefully, make the team," she added.

In the boys' Under-20 200m final, Wolmer's Xavier Nairne posted 20.86 to take the event ahead of Petersfield Antonio Watson, while Jamaica College's Christopher Scott took the boys' Under-17 200m in 21.70, ahead of Clarendon College's Richard Nelson (21.89).