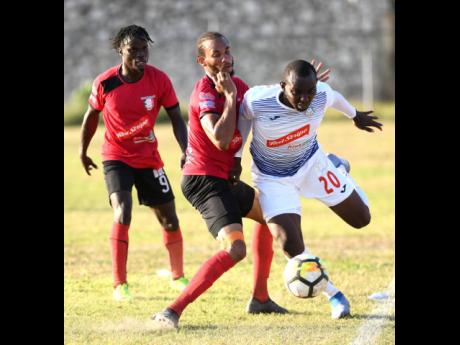 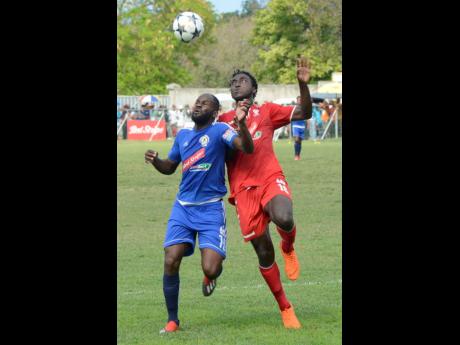 Francois Swaby (left) from Mount Pleasant FA and Michael Heaven (right) from UWI FC challenge for the ball during the second-leg quarter-final tie of the Red Stripe Premier league football match at Drax Hall in St Ann on Sunday, March 31, 2019.
1
2

Although Mount Pleasant manager, David Galloway, admits his side is excited to be in the semi-finals of the Red Stripe Premier League (RSPL),he believes things are only going to get tougher from here.

The St Ann-based team will square off against defending champions, Portmore United, in the first leg of their semi-final tie at the National Stadium this evening at 5:30 In the second game of the double-header, Cavalier will take on last year beaten finalist Waterhouse at 8:35.

However, Galloway, who represented the St Ann club at the RSPL press conference, said if they want to realise their dream of being in the final, they will have to give everything against the champions.

"This is a very exciting moment for Mount Pleasant, a moment we have all been waiting for. It was a real uphill task (getting to semis). It wasn't an easy road but to God be the glory, we overcame our obstacles and our problems and made it through. When we met UWI in the two (quarter-final) encounters, it wasn't easy, it was a hard-fought game. UWI came at us but at the end of day, the better team and the luckier team won. We are glad that we came out on top and now we are here in the semi-finals," he said.

"It's the harder part of the tournament but we'll take it one day at a time and that's what we are doing now. The semi-finals will be a rougher time of the season but the team is refocused and we are prepared for it," he continued.

"It took hard work, commitment and dedication for us to reach so far in the competition. The team knows they are now in the top four and that they are a step closer to the final, and if we want to be in the final and fullfil our hopes and dreams, we know it only takes more commitment, hard work and dedication. So far, we trained well this week and the players are more focused than before," he commented.

Portmore coach Shavar Thomas says his team is raring to go and that the one-week break has helped them rejuvenate for the semi-finals.

"We have been very active. We have been playing games. As recent as Wednesday, we played the St Catherine knockout final and the Sunday before we played the semi-final. We have played practice games and training sessions. But the rest from the RSPL definitely gave us time to regenerate and give the people nursing injuries some time to get better, as well as break our team down and worked on things we need to work on individually," he said.

Nevertheless, he expects a tough match from the newcomers. "This is just the first half of two games, and we are going up against the best defensive team, so we have a lot of work to do.

Even if you pick up a team from the street they are going to play Portmore hard, that being said those two games we were pushed and challenged. If it was easy for us, it would have hidden some things we needed to see. For them to get to this point is tremendous but that shows they have a good group. So we have a long way to go, we just want to put in a good showing and see where that takes us," he added.

The Donovan Duckie-coached Mount Pleasant will look to Francois Swaby, Kemar Bennett, Ronaldo Rodney, Ladale Rchie and Cordel Benbow for victory, while Portmore hopes rest on Ricardo Morris, Javon East, Rondee Smith and schoolboy Lamar Walker. In three meetings this season, the teams share one win each and a draw.