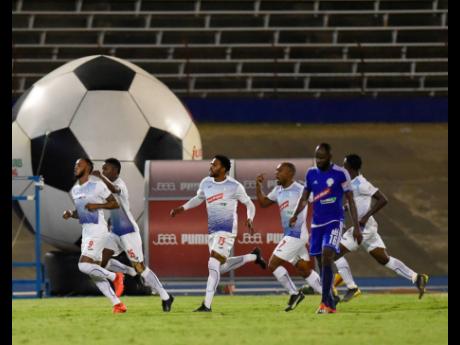 Roshane Sharpe of Portmore United (left) celebrates scoring minutes before the whistle to secure his side’s first-leg semi-final win in the Red Stripe Premier League against Mount Pleasant FA at the National Stadium on Monday.

But he believes his team can take a lot from the fact that they outplayed the champions for most of the contest and only lost the game because of their lapse in concentration in the final minutes of the match.

"It's not a good feeling losing the way we did. Any team would feel down. With one and a half minute left, we thought it was over and one simple mistake cost us the game. We realised where we went wrong and we are going to sort it out, little by little. It was just loss of concentration in the last two minutes of play and that cost us the game," he said.

"They (players) felt bad about the fact that they lost the game but they felt good that they had outplayed the defending champions in a manner that wasn't expected from a lot of people. So despite the fact that they went down 2-1, they still feel within themselves that they can do much better."

Galloway believes the tie is far from over. He said his team showed in the first leg that they can more than compete with the champions and he is backing his team to turn in an even better performance in their second-leg meeting.

"I wouldn't say it is a hard task (getting back) because we are prepared physically and mentally. We just lapsed in concentration in those last minutes and it cost us as some persons just felt the game was over. But they realised the game is not over until the final whistle and that's what cost us at the end. But all hopes are not gone. We went down against UWI and came back and that's what put us in the semi-finals. We just have to regroup and come again," he said.

Jourdain Fletcher's 48th-minute goal cancelled out Javon East 43rd-minute strike in Monday's first leg at the National Stadium. However, in the second minute of time added, East cross to an unmarked Roshane Sharpe at the back post, who tapped home from close range to give the champions the advantage going into the second leg, scheduled Monday April, 15.