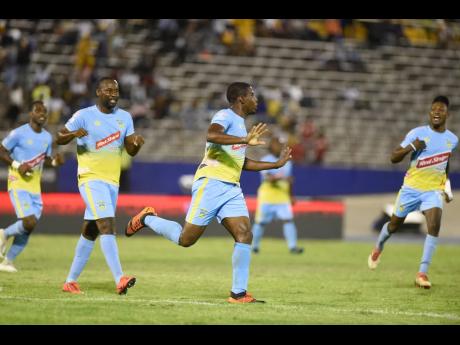 Waterhouse captain, Keithy Simpson, says his team will not sit comfortably on their 2-0 aggregate lead against Cavalier when they face off in the second leg of the Red Stripe Premier League semi-final next Monday. Simpson, who was the Man of the Match in the first leg at the National Stadium on Monday, says the focus will be on winning the second leg, much like the first, and they intend on being as ruthless.

"First, it's a good thing to win the first leg, but (for) the second leg, our frame of mind is that it is going to be harder than the first," Simpson said. "The mindset is to win, not because we won the first leg means we are going to drop our heads and say the game is all done and dusted. We have been training to be ruthless and that's what we are going to do on the pitch. We were far from our best, but it's a work in progress. We didn't have any games and Cavalier was ahead in that aspect, as they just came from a two game tie and it showed when they had possession of the ball. But we worked to the game plan and did what we needed to do to get the win in the first leg."

The former national under-20 midfielder believes that he is playing alongside two of the best midfielders in the country in Keammar Daley and Tremaine Stewart, and expects their quality to continue to play a key role in their success.

"When you get to hit heads with such great players, you just have to do it and do it to the best of your ability, and I believe together we can achieve great things," he said.

Simpson, who spent three weeks out injured, came back just in time for the semi-finals and the hard-working player turned in an outstanding display, which he topped off with a goal in the 34th minute to help his team to victory.

But the dynamic midfielder says, as he showed on Monday, his team can always rely on him.

"Personally, as a leader, I always try to lead from front and by example, so whenever the opportunity arises for me to give the team the nod, or go ahead, I will definitely capitalise on it.

"After just coming back (from injury), I even surprised myself because I only had a week to train. Before, I was on rest, then active rest. Then finally (started) training and we would have had match on the Monday, and I started training on the Tuesday before. So I only had a week to catch up with the guys, but I put in the work and did what I had to, and it paid off in the performance," he said.