Cavalier coming with everything 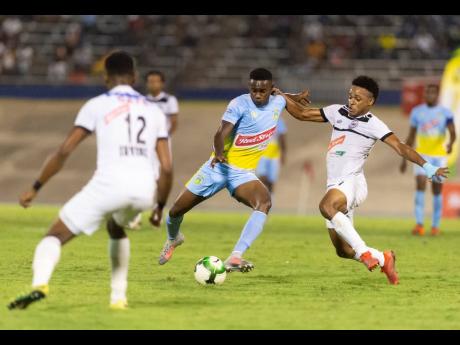 After conceding from two set plays in the first leg of the Red Stripe Premier League RSPL) semi-final, Cavalier attacker Alex Marshall and general secretary Lance Cowan noted that they will have to pay greater attention to this aspect of Waterhouse's game as they look to overturn a 2-0 deficit to make it to the final.

""Last Monday, we didn't give up much chances, we just conceded from two set pieces, and that's what we need to work on going forward," Marshall said.

The former St George's College standout admitted that his side's front three, including himself, Chevonne Marsh and Nicholas Hamilton, were far from their best and they, too, will have to step up for the second leg to give their team any chance they may have for a fightback.

"We have to try and not concede any more in order for us to get the goals. The last game, the players up front were not as effective as previous games - Marsh, Hamilton and myself. We didn't play together, that's why we didn't get any goals. But we know what needs to be done and everybody is putting in extra work in order to get the job done in the second leg," he said.

"Waterhouse are a good team, so we need to come out and play to the best of our abilities and bring our A game. We have done it before and we know we can score goals, but the players up front will have to turn up and that's what we are planning on doing."

Cowan is also wary of Waterhouse threat from set plays and warned his team to be especially mindful on dead-ball situations. "We know we have to score and we have to stop them from scoring. We will clearly have to defend those set pieces and do what we have to do. Goals win matches, so we have to score to win the game, and we have to minimise the mistakes we make; and any mistake they make we have to capitalise on it," he said.

"Waterhouse are strong on set pieces and they scored from two. But in the last few seasons, some of the best football we have played is against Waterhouse. Last week we had the confidence of beating them and we showed it on the field. They regained some of their confidence by beating us in one game, but now we need to do our talking on the field."

Meanwhile, Waterhouse assistant coach Daniel Bent said they are looking to consolidate their position by going out and doing the right things on the pitch. He also believes his team can score more goals as well as keep Cavalier off the score sheet.

"We have to continue doing the right things and making the right decisions. The players are mindful, and that is the mindset of the players and coaching staff," he pointed out .

The second leg of the semi-final between the two teams begins at 5:30 p.m. at the National Stadium, while Portmore will take on Mount Pleasant at 8:30 p.m.