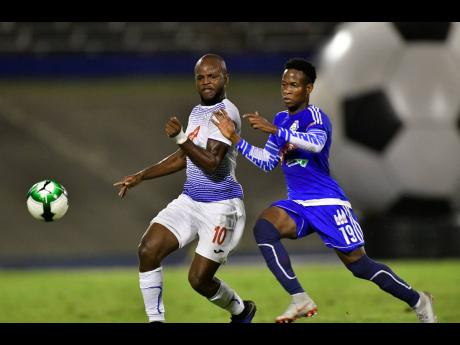 Portmore United booked a rematch with Waterhouse in the Red Stripe Premier League (RSPL) final after battling to a 1-1 draw with Mount Pleasant in their second-leg semi-final tie at the National Stadium last night. The defending champions advanced 3-2 on aggregate after a 2-1 first leg win last week.

Javon East, who had a goal and an assist in the first leg, opened the scoring after 23 minutes. Sue-Lae McCalla got a goal back for Mount Pleasant in second half stoppage time, but it was too late, as Portmore held on to secure a fourth successive berth in the final.

"To get back here was a major challenge, because from the start of the season, all these teams in the RSPL have been coming at us, and we didn't expect an easy road. But credit to the team. They stuck through the season, took it game by game, stuck to it, and now we are here," winning coach Shavar Thomas said.

He added that he expects an even tougher final from Waterhouse this year.

"It's a different team (with) a different coach, but it will be a challenge," he said. "They have experience and we are not taking them lightly, so it's something to look forward to."

Mount Pleasant came out guns blazing, but Portmore were solid at the back and kept them from creating any real opportunities early on. But as Thomas promised ahead of the game, Portmore did not sit on their laurels and brought the fight to their opponents. They were rewarded for their enterprise in the 23rd minute when they caught Mount Pleasant on a break and Javon East played a give and go with Cleon Pryce before finishing the play by sliding home from three yards.

Portmore grew into the game after the goal and Pryce came very close with a rasping drive after being set up by East at the top of the box. But neither team really troubled the opposing goalkeeper after that. Jourdaine Fletcher's deflected shot, which was well handled by Shaven Paul, was the closest Mount Pleasant came to pulling one back before the half.

Both teams came out and traded good attacks after the interval, as more openings started to appear in either defence. As more gaps began to show, East wasted a great chance to increase Portmore's advantage after he was played through, but he lifted his effort over from 12 yards.

Kemar Beckford should have pulled a goal back after he rounded Paul inside the box, but his effort was cleared off the line. Then moments later, Paul came up big when he denied Francois Swaby an almost certain goal from close range.

Mount Pleasant threw everything forward in the final minutes and former Portmore player McCalla headed home a Xavian Virgo cross from six yards out to ensure a tense finish to the contest, but Portmore held on to take their place in the decider.