Portmore, W’house clash in repeat of RSPL final - W’house looking to turn the tides on Portmore 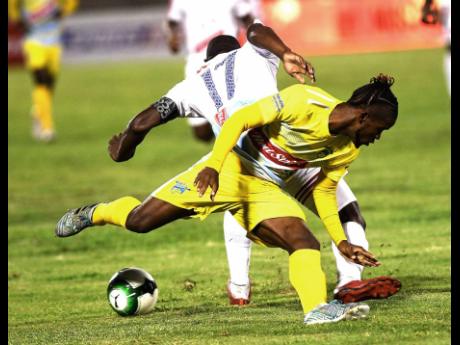 Tonight Portmore and Waterhouse will battle once again for the Red Stripe Premier League (RSPL) title at 8:35 at the National Stadium.

Both camps believe that proper execution and getting things right on the night will be the key to being crowned champion for the 2018-19 season, but Waterhouse is carrying a chip on their shoulders after they were defeated by the team from the Sunshine City on penalties last year.

Waterhouse assistant coach, Daniel Bent, admitted that they are salivating at the opportunity to put the ghost of last year's defeat to rest and end their 13-year wait to be crowned national champions. And he believes his team has the maturity to wrap up the contest in the first half of the game.

"Everyone is hungry, from the players, coaching staff to the community for the purpose of wanting to be 2018/2019 champions," he said.

"Maturity and experience walk hand in hand and our backline has been a tower of strength. The centre of defence with Shawn Lawes and Nicholay Findlayson has been rock solid. Mark Miller and Ricardo Thomas (wing backs) have the most assists. In the midfield, we have the experience of Keithy Simpson, Tremaine Stewart and Kemmar 'Dada' Daley, all national players who have played in Europe. Then in the frontline we have Kenroy Howell, who has played overseas, Andre Leslie and Andre McFarlane, former national youth players. Plus players coming off the bench, this Waterhouse team is like another world 11.

"So as long as we as a team execute and make the right decision this match should be over from first-half and the players are hell-bent on getting it right this time. They want something to show for the hard work they have put in from preseason to now," he said.

Portmore coach, Shavar Thomas, also believes victory for his team hinges on how they execute their game plan. The St Catherine-based team is much younger than Waterhouse. But they have players with as much experience and quality such as goalkeeper Shaven Paul, Rosario Harriott and Emelio Rousseau in defence, Damian Williams, Ricardo Morris and Andre Lewis in midfield and the reliable Javon East up front, supported by seasoned RSPL campaigners, Cleon Pryce and Roshane Sharpe but Thomas says getting it right on Monday will be the key to their success.

"We have played them three times and all three ended in a tie. There is no more game to be played after Monday night, this is the last one, so we have to give it our all. There is no chance to fix it in the next game. But our players understand that and that will be the difference, so we expect our players to come out and be tough to play against, execute on the offence and on defence and once we do that it will bring us success," he said.