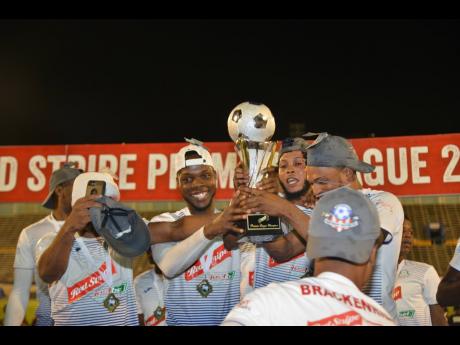 Members of the Portmore United team celebrate with the Red Stripe Premier League trophy after their 1-0 win over Waterhouse in the final at the National Stadium last night.

Portmore United defeated Waterhouse for a second successive Red Stripe Premier League (RSPL) title at the final at the National Stadium last night to become only the second team to win back-to-back titles since Arnett Gardens in 2001/2002.

Midfielder Ricardo Morris netted the game's only goal, beating Diego Haughton with a ferocious strike from 25 yards after 57 minutes.

However, unruly spectators spoiled what was shaping up to be a spectacle and threatened to bring the game to a premature end, after hurling missiles on the field and running track, before breaching the playing area and holding up the game for more than 10 minutes, despite the efforts of the security force.

The fracas started with little more than 10 minutes to go and with Portmore leading 1-0, but it brought an unsavoury climax to what was being anticipated to be an exciting finale.

Portmore coach Shavar Thomas hailed the team's consistency and pointed to their success in the competition, after leading the club to becoming the team with the most titles - seven.

"Portmore United have won the most Premier Leagues. It was one of our aim this season to repeat as champions, Arnett was the last team to win it years ago, and it was something we set out to do and it wasn't easy," Thomas said.

Waterhouse controlled possession for the first 15 minutes but their possession counted for nothing as they failed to threaten the Portmore goal.

However, Portmore came to life after the first 15 minutes and played with more conviction going forward, enjoying the better chances.

Ricardo Morris had the first real effort at goal but his shot flew just over from almost 30 yards. Minutes later, Shawn Lawes had to go full stretch to deny Emelio Rousseau's cross with two players lurking at the back post.

Soon after Javon East had a dangerous looking shot blocked by Lawes inside the box.

Waterhouse's best chance came from a good build-up in the 38th minute, but Ricardo Thomas could not control the final ball. Portmore ended the half on a high as Morris whistled another rocket just over from 25 yards.

Immediately after the break, Diego Haughton had to drop low to stop a header from a corner. However, Portmore deservingly took the lead after 57 minutes when Morris, who had threatened from long range all night, beat Haughton with a sweet curler from 25 yards out.

The game opened up and came to life as Howell tested Paul with a rasping effort from the edge of the box. Moments later Rondee Smith broke through but Haughton was quick off his line to deny the forward.

But the game was then held up for more than 10 minutes as security personnel tried feverishly to keep the patrons in the bleachers under control as they persisted in throwing missiles on the field, before invading the playing area and delaying the game.

On the resumption, Waterhouse tried all they could to get an equaliser but they had apparently lost their momentum and vigour to go forward.

Meanwhile, coach Marcel Gayle said he was proud of his players.