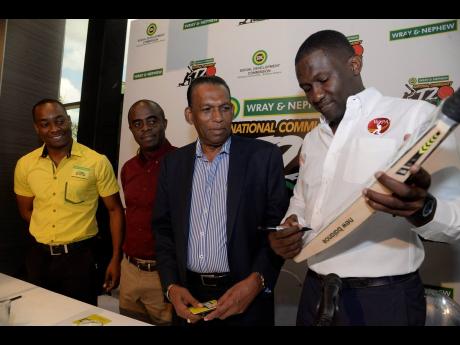 The competition which was launched at Wray and Nephew’s New Kingston base yesterday, sees Wray and Nephew coming on as new title sponsor with an endowment of $40 million in its 13th season.

But Hinds, in his role as constituency chairman for the PNP, wanted to lead and motivate by example and he saw no better way to do that than to take to the field with the team this season.

“I have special interest in eastern Hanover,” Hinds said. “It is one of the places where I have spent the last nine months. I have been working in the community and in the constituency, and they have expressed an interest to play the competition and we have done a lot of work to try and get the community to be driven by sports.

“I have advocated for that, actively, for the last nine months but what will be a stronger message, if any at all, is when I actually get on the cricket field and start playing with them. That will demonstrate the interest I have in the community, and that I want to contribute, and they are looking forward to it,” he said.

He said teams in eastern Hanover, including Elgin Town, have a very rich history in the tournament and with him being a member, the community is very upbeat and expectant of their season.

“They have done well over the years, and teams in eastern Hanover have done well, but we just want to make sure we can make a valid contribution to the community, the constituency, and support cricket at large. I am very upbeat and looking to participate in the competition,” he said.

The competition, which begins on Saturday with a full slate of matches, will see 229 teams from 327 communities taking part. The 13 parish winners and the three best losing finalists will advance to the national tournament where they will be placed into four groups of four and play on a round-robin basis.

The top two teams of the four group winners will advance directly to the semi-finals, while the other two will meet the best two losers (in a quarter-final) to decide who go to the semis. Semi-final winners advance to the final. Winners of the parish competitions will take home $100,000, second $50,000 and third place $25,000. The national champion will receive $1.2 million, second $600,000, third $300,000, and fourth place $150,000. The final is set for Sunday, August 5, at Noranda Port Rhoades Sports Club in St Ann.