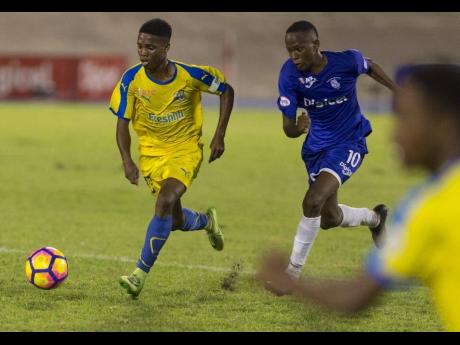 Richard Walker, lead professional development phase coach at Stoke City FC, said the seven players who were selected by 2018 Digicel/ISSA Manning Cup ambassador and Stoke City legend, Ricardo Fuller, to experience the English club's Under-18 programme for 10 days showed fantastic application, focus and made sound progress in understanding the details required to do the training effectively.

Following the intense training camp, Walker believes the players have grasped a lot.

"The players worked on the importance of changing the point of attack quickly to move the opposition's compact defensive unit and the need for clever rotation of positions when doing this. There is still room for improvement in this area, but the boys made steady progress," he commented.

Digicel Public Relations and Communications Manager Elon Parkinson, who journeyed to England with the players, said that despite working in less-than-ideal weather conditions, the players applied themselves remarkably, received top marks from the Stoke City coaches and took a major step towards becoming professional footballers.

"They returned home with priceless skills that can now be imparted to fellow players. But, more importantly, the 10-day exercise opened their eyes and minds to the real world of professional football and what it takes to make it to the top. The Digicel Stoke City FC experience will, hopefully, bring them closer to their dream of becoming global football stars," he stated.

He noted that Fuller did a tremendous job in guiding the boys through the experience.

The former national striker was full of praise for the boys as he encouraged them to demonstrate fair play, to trust each other, and improve their mental strength. "It looks as if they've been at the academy all along, they all did very well. They stood out, too, so I am really happy that they came and made the most out of the experience," Fuller said.