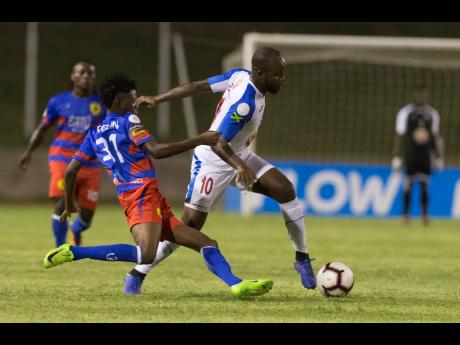 Javon East (right) of Portmore united is tackled by Judlin Piergile of AS Capoise during their FLOW Concacaf Caribbean Club Championhsip match at Stadium East in Kingston last night. 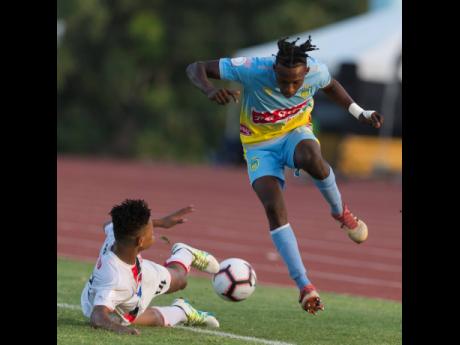 It was the second 1-0 win from as many games at the tournament for the Red Stripe Premier League champions, who climbed back to the top of the four team group with maximum six points.

In a lacklustre first half, Ricardo Morris had the best chance to open the scoring but he kicked wide of the target with only the goalkeeper to beat.

The second half failed to provide any lift to the contest, with the first real chance falling to Frantz Moise, who could not redirect a low cross on goal.

But moments later, Portmore were awarded a penalty for a foul in the box, but the reliable Javon East failed to convert from 12 yards. However, minutes later, the striker latched on to a pass at the back post to tap home the opener. Portmore had a few chances to add to their advantage, but were denied by good goalkeeping.

Portmore coach, Shavar Thomas, said discipline saw them over the line in that contest.

"In the team talk, I said what is going to bring the victory we need is discipline," he said. "Discipline in our shape, function, and doing the right things all times. Our players are resilient and when it gets tough, they show up."

Portmore and Waterhouse will now meet at the same venue at 8 p.m. tomorrow to determine who top the table, with both Haitian sides Capoise and Real Hope meeting in the opening game at 5:30 p.m.