East looking for another big game 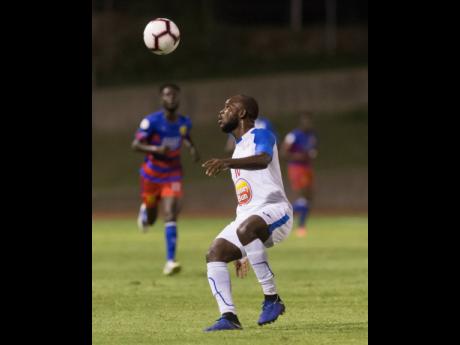 Portmore United’s Javon East prepares to cushion a header during the FLOW Concacaf Club Championship game against Haitian side AS Capoise at Stadium East on Tuesday night.

Portmore United striker Javon East has proven he is a big game player in the just- concluded Red Stripe Premier League (RSPL), with his golden boot winning performance of 12 goals.

However, the 24-year-old's exploits did not stop there as he has carried his brilliant end-of-season goal-scoring form into the FLOW Concacaf Caribbean Club Championship, where he has scored twice in two matches to put Portmore atop the four-team group. The club is now in pole position to take the automatic spot for the 2020 CONCACAF Champions League, and he is pleased his goals are continuing to help the team move forward.

"These goals are important to the team, so we have to keep on scoring goals and keeping our clean sheets so we can move forward into the next game," East explained.

Portmore defeated Haitian club Real Hope 1-0 in their opening game, thanks to East's second-minute strike, he then netted the opening goal in the 19th minute to settle the nerves in their second match against AS Capoise, who they turned back 2-0.

"It means everything for the team to get a good start in the game for the tournament," he said.

Portmore (on six points) play Waterhouse (on four points) in the top-of-the-table clash this evening with the winner to advance automatically to next season's CONCACAF Champions League. He aims to make it business as usual when they match up against the team they defeated for the RSPL title over two weeks ago.

"We have to take it a game at a time and we will continue to do that and see where it takes us," East said.

"Javon knows that once he comes out and works he will always get his opportunities," Thomas said. "He is a player that creates chances for himself and scores those that the midfielders create for him. He knows what he has to do, so he will hold his head up and bring a positive attitude," he said.

East is the tournament's leading scorer with two goals from two matches.