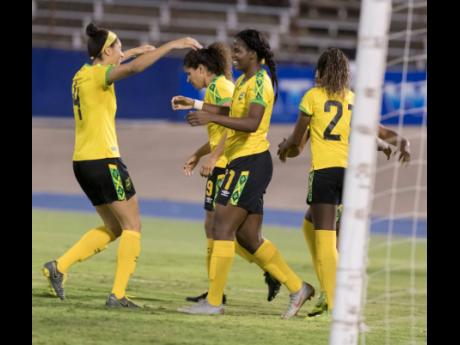 Jamaica’s Khadija Shaw (third from left) celebrates after scoring her second goal with her teammates as the Reggae Girlz beat Panama 3-1 at the National Stadium yesterday. 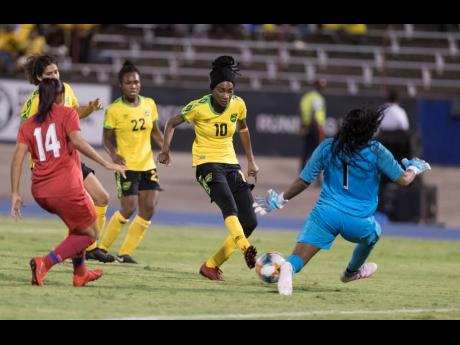 Jamaica Reggae Girlz will leave the island for the women's World Cup in high spirits after scoring an impressive 3-1 win over Panama in an international friendly at the National Stadium last night.

A double from Khadija Shaw (29th and 49th) and one from Shakira Duncan (80th) saw the Reggae Girlz to victory in a convincing display against the Central Americans, who got their goal through Natalia Mills in the 68th minute.

Coach Hue Menzies said it wasn't the best team performance but believes the individual qualities of the Girlz made the difference.

"We got the result but we didn't play as well but at the end of the day we have some special players that can change games just like that and I thought they did well to capitalise on the opportunities," he said.

Allison Swaby signalled the host's intention after only two minutes but she could not keep her effort on target after arriving at the back post. Minutes later, Trudi Carter had an excellent chance to break the deadlock but shot over from just inside the box.

Swaby then came close from one of the many corner kicks they received in the 15th minute, as the Reggae Girlz piled on the pressure. Carter stole possession and broke inside the box but she could not beat the advancing Yenith Bailey in goal.

Karla Riley provided the visitors' best moment 24 minutes into the contest after she weaved her way through the Jamaica defence and tested goalkeeper Sydney Schneider with a solid effort on goal.

But Dominique Bond-Flaza replied soon with a rasping effort that just went over. Shaw also came close minutes later with a low shot past the upright. But Riley, Panama most dangerous player, forced Schneider into a desperate save on 25 minutes..

However, in minute 29 minute Shaw broke the deadlock when she was left unmarked in the box and she fired a half-volley past Bailey to make it 1-0.

The visitors had a good period after they went behind and had a couple dangerous efforts, but Shaw nearly made it 2-0 with a diving header two minutes before the half.

However, four minutes into the second half, Jamaica extended the lead when Oufolasade Adamolekun sweeping cross found the towering Shaw, who slid home from six yards.

Shaw and then Carter missed good chances to add to the the Girlz lead. But Panama got a goal back in the 68th minutes when a mix-up in defence allowed Mills to score in an empty net from 18 yards out.

But as Panama went in search of the equaliser they got caught on the counter and Shaw played a ball from the right to Shakira Duncan, who slipped the ball home, to go 3-1 up in the 10 minutes from the end.

The Girlz then created a number of chances to add to their lead but failed to take advantage.

Panama coach, Suaraz, said it was a tough game for his side." Our team five months ago stopped playing together, but Jamaica is a great team," he said.