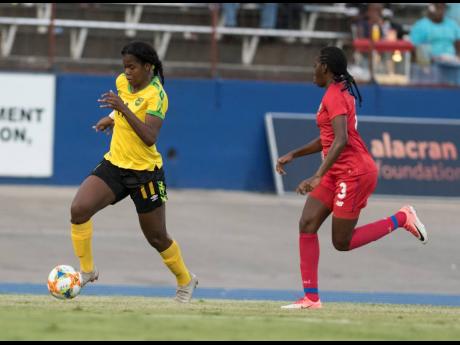 Reggae Girlz top striker Khadija 'Bunny' Shaw said the support the team got from the public on Sunday for their farewell home game against Panama before their departure for the Women's World Cup in France next month was a big motivation in their impressive 3-1 win over Panama at the National Stadium.

Shaw, who has played for all the various national teams and who holds the distinction of playing for the Jamaica under-15, under-17 and under-20 teams in the same year, said the crowd at the stadium on Sunday was the biggest she has played in front of locally and that it gave massive encouragement to the team.

She said the support makes the team feels unstoppable and she now hopes more local fans will continue to throw their full support behind them.

"It (match) was amazing. I was talking to Trudy (Carter) and I was saying that I think this is the biggest crowd we have played in front of in Jamaica. But we talked about it all week, we wanted everyone to come out and see what we can do, and at the end of the day I hope they are satisfied with our performance as we needed the crowd behind us," she said.

"They were behind us and that's what we need going forward, the more people we have behind us pushing and motivating us, the better we are going to be as a team. Nothing beats motivation and once we have our courage and confidence in ourselves and our crowd behind us, we will be unstoppable."

Shaw, who led the Reggae Girlz in scoring in the qualifiers and who has received most of the team's attention, said the aim now is to get stronger as the tournament draws nearer.

"From the first round (qualifying), we said our main objective was to get to World Cup. We knew what we wanted to do and it was just to qualify for the World Cup. But the more we play the games and the stronger we build, we just have to continue doing that by moving forward, and now we just have to build on it as a team," she said.

Shaw netted twice in the Reggae Girlz 3-1 win over Panama at the National Stadium on Sunday.