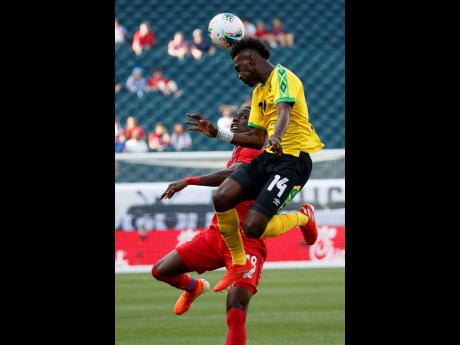 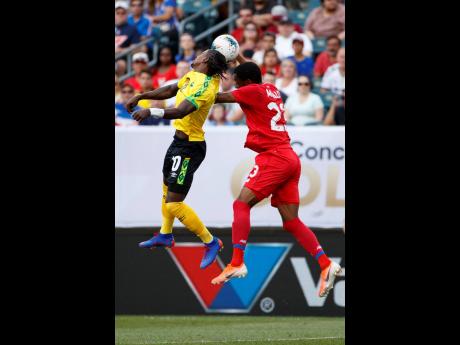 Jamaica’s Darren Mattocks heads the ball onto the arm of Panama’s Michael Murillo causing a penalty. 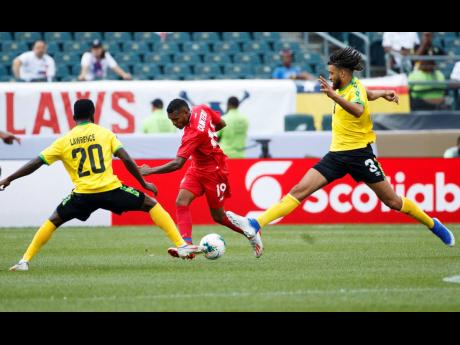 Panama’s Alberto Quintero (centre) kicks the ball past Jamaica’s Kemar Lawrence (left) and Michael Hector during the first half of a Concacaf Gold Cup match. 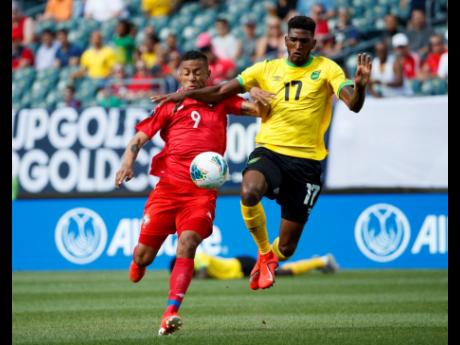 Panama’s Gabriel Torres (left) and Jamaica’s Damion Lowe battle for the ball during the first half of a Concacaf Gold Cup match yesterday.
1
2
3
4

Jamaica defeated Panama 1-0 in their Gold Cup quarter-final at the Nissan Stadium yesterday, courtesy of Darren Mattocks 75th-minute penalty to advance to the semi-finals.

But the Reggae Boyz will be without stalwart defender Damion Lowe, who will miss their semi-final match against the USA or Curacao after he picked up his second yellow card of the tournament yesterday.

Lowe, the son of former Jamaican great, Onandi Lowe, was first yellow carded against El Salvador and last night he received a caution on 90 minutes, which makes him ineligible for the Reggae Boyz next match. The ordeal will be a major blow for coach Theodore 'Tappa' Whitmore, ahead of the semi-finals on July 3.

At the Nissan Stadium both teams started slowly and looked to feel out each other. But while the Panamanians tried to break down the Reggae Boyz with their possession game, Jamaica defended strongly and looked to pinch a goal on the counter.

The first real chance of the match fell to Panama in the 25th minute, but Abdiel Arroya blasted into the side netting. Edgar Barcenas then had great chance minutes later but Blake's alertness prevented the midfielder from getting off his shot. As Panama gained more control of the game, Alberto Quintero had a shot deflected just wide. But Pamana continued to create openings and in the 41st minute Arroya shot into the hands of Blake.

Jamaica's best chance, three minutes before the break, came from Panama losing possession outside their box, but Orgil's shot could not beat Luis Mejia from 18 yards. Shamar Nicholson then came close with an overhead kick moments later but his effort went just wide.

It was a much better start in the second half by the Jamaicans and Junior Flemmings had a shot just wide from 18 yards. But on 75 minutes, Jamaica grabbed the lead from the penalty spot after a hand ball just inside the area and Mattocks, who just came on a substitute, converted the resulting kick to put Jamaica ahead.

Flemmings could have made it two nil minutes later but he could not get a touch from three yards. But the Reggae Boyz then defended solidly to claim the win and move on to the last four for a third successive Gold Cup.