Brown, Yee Sing back from FWWC 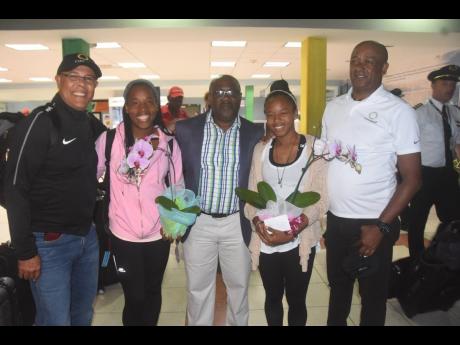 Jamaica's female football assistant referees, at the just concluded FIFA Women's World Cup (FWWC), Princess Brown and Stefanie-Dale Yee Sing, said they were both surprised to be selected to do the semi-final game between Sweden and the Netherlands, because of their stature, compared to some of their more experience counterparts at the tournament.

Brown and Yee Sing got their World Cup experience started on day two of the tournament with Germany playing against China. They worked with referee Marie-Soleil Beaudoin of Canada. They then returned for the final Group B game between Korea Republic and Norway and showed their qualities, and that earned them a recall for the round of 16 game between hosts France and Brazil, from which another impressive display earned the team their selection for the final four game.

Both ladies thought they exceeded expectations at the tournament and were honoured to represent their country with distinction.

"It was a great moment and it was an honour. It was a challenge for us knowing we had to work very hard to get a next game. But we took it a game at a time to achieve our goals," Brown told reporters after they landed at the Norman Manley International Airport last night.

"I was really a surprise, because you have a lot of referees there with a lot of years of experience. Stefanie was there for the first time, me for the second time, and our referee (Marie-Soleil Beaudoin) for the first time. So it was a great privilege and an honour to stay back for the final rounds," she stated.

Her counterpart, Yee Sing was also shocked to learn she was being called upon to officiate a World Cup semi-final, her first time being at the tournament. And although they went to the tournament well prepared, she was amazed at how well she did at her first senior World Cup tournament.

"It was an amazing feeling," she said. "It was my first World Cup and I wouldn't say I didn't have any inhibitions, but you could see what I went there to do and I am happy for this accomplishment."

"We took it a game at a time it was an honour to do a semi-final. I told Princess when we got there that I think I am a small fry to all these experienced referees, so I was totally surprised to be called to do the semi-finals at my first attempt at it."

Yee Sing added that referee Beaudoin also gave them the confidence to make their calls.

"What we learned from home and everything we did in training was what we experienced in games, and the referee gave us the confidence to make decisions and help her make decision," she said.

Jamaica Football Federation general secretary, Dalton Wint, who met the ladies on the behalf of the body, said they achieved a tremendous accomplishment.

"These ladies have carried the flag of Jamaica at the highest level," he said.