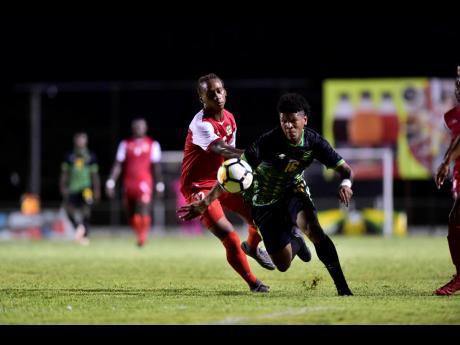 Jamaica’s Nicque Daley (right) on the attack as Salas Cannonier of St Kitts and Nevis looks on at the Anthony Spaulding Sports Complex yesterday.

Jamaica's dream of participating in the Olympics Games came crashing down after the under-23 team was eliminated at the first stage of the Concacaf men's Olympic qualifiers at home at the Anthony Spaulding Sports Complex, after playing to a 1-1 draw with St Kitts and Nevis last night.

The result means St Kitts topped Group A with four points and will move on to the next phase, ahead of Jamaica on two and Dominica on one.

"First let me apologise," said coach Donovan Duckie, who failed to win any of his two matches on home soil. "It is very disappointing, the result was not what we wanted but the lads gave their best. We created 13 chances, they created a half chance and it was one-one. I thought we were dismal in front of goal in the first game and hence we did not get the desired result, we didn't produce the good."

Both teams started well, with St Kitts showing very little fear for the home team and giving as good as they got. But the Jamaicans had few good chances to go in front but did not find the net until the ball fell kindly to Nique Daley who made no mistake.

Five minutes after the break, Daley and Alex Marshall failed to make good connection to a cross from Kevon Lambert. But St Kitts always looked dangerous going forward and in the 56th minute Geovanni Lake added his third of the tournament when he slotted past Jaedin White from just inside the area.

Jamaica, needing to win, found it difficult to break down a tough St Kitts defence, although they got a few look-ins but Daley, Lamar Walker and Deshane Beckford all failing to capitalise.

St Kitts also had chances to put the game to bed, with Lake heading wide in the 69th minute, while Tahir Hanley squandered two great opportunities at the end.